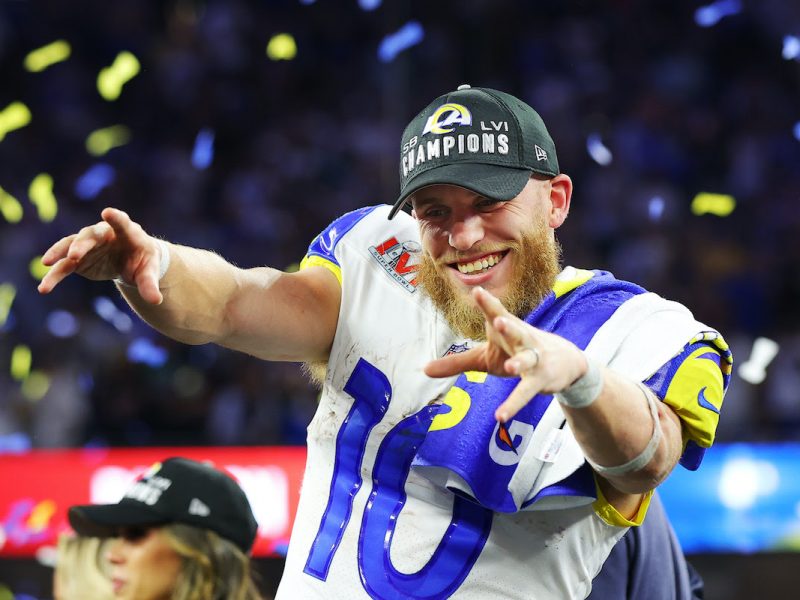 Jerry Rice and Cooper Kupp. That’s a short list, but it’s one that holds significance following Super Bowl LVI. When the once-forgotten wide receiver caught his second touchdown pass of the big game on Sunday — the eventual game-winner — he secured his team’s Super Bowl destiny, the MVP and one of the most unbelievable achievements by any player at the position.

Kupp finished the 2021 season with the AP Offensive Player of the Year award, the receiving triple crown in receptions (145), yards (1947) and touchdowns (16), and capped it off by winning Super Bowl MVP. Jerry Rice is the only other receiver to achieve those feats in NFL history, and it took him his entire career. Kupp did it in one season.

But the ultimate pass-catching season was completed by a player who few expected to reach this level. Kupp — relatively average at 6-foot-2 and 200 lbs. — was a little-known high school prospect who received just one scholarship offer from a Division I program. It came from Eastern Washington, just a few hours east of his hometown in Yakima. Expectations weren’t high, but Kupp blew them away.

In four collegiate seasons, he amassed 428 receptions for 6,464 yards and 73 touchdowns en route to shattering every Big Sky Conference receiving mark. The first two (receptions and yards) are the most in FCS history. And with national awards piling up in the dozens, Kupp was still overlooked entering the NFL.

He ran an unimpressive 4.62-second 40-yard-dash at the NFL combine before sliding to the third round of the draft. The Rams selected him with the 69th pick, and his ascent to stardom began.

But it didn’t happen overnight for Kupp. Rams head coach Sean McVay had him fourth on the depth chart in his rookie campaign. He moved to a starter in 2018 but had his season cut short due to injury. In 2019 and 2020, Kupp blossomed. He caught 90-plus passes for roughly 1,000 yards in each season with Jared Goff throwing the ball. Goff was about to be gone, though, and his replacement would develop a report with Kupp that would ignite him to another level.

When Matthew Stafford arrived in Los Angeles, the Rams had three star targets at the receiver position — Kupp, Robert Woods and Van Jefferson. Woods went down for the year in November. The team added Odell Beckham Jr. as an upgrade, but Stafford’s already had his favorite target.

The Stafford-to-Kupp connection was mind-blowing for a first-year quarterback-receiver pairing. The duo connected 145 times for nearly 2,000 yards and 16 trips to the end zone — the kind of single-season numbers only rivaled by QB-WR duos like Dante Culpepper and Randy Moss, Drew Brees and Michael Thomas, Peyton Manning and Marvin Harrison, or Jerry Rice and Joe Montana/Steve Young. Many of those names are Hall of Famers.

Kupp was part of the Rams team that lost Super Bowl LIII three years prior. After that loss, he said he had a vision that he would someday return to the big game to become a Super Bowl champ and the MVP.

“I shared that with my wife because I couldn’t tell anyone else obviously what that was, but from the moment this postseason started, there was just a belief, every game, that it was written already.” — Cooper Kupp

Kupp has always been the soft-spoken, often overlooked receiver who is anything but flashy like his positional counterparts. His approach to business combined with a gifted new quarterback and friend in Stafford paved the way for the greatest receiving season the NFL has ever seen. And it ended with Kupp on the receiving end of the game-winning touchdown.

Stafford to Kupp… A year of records sealed with the Lombardi Trophy.