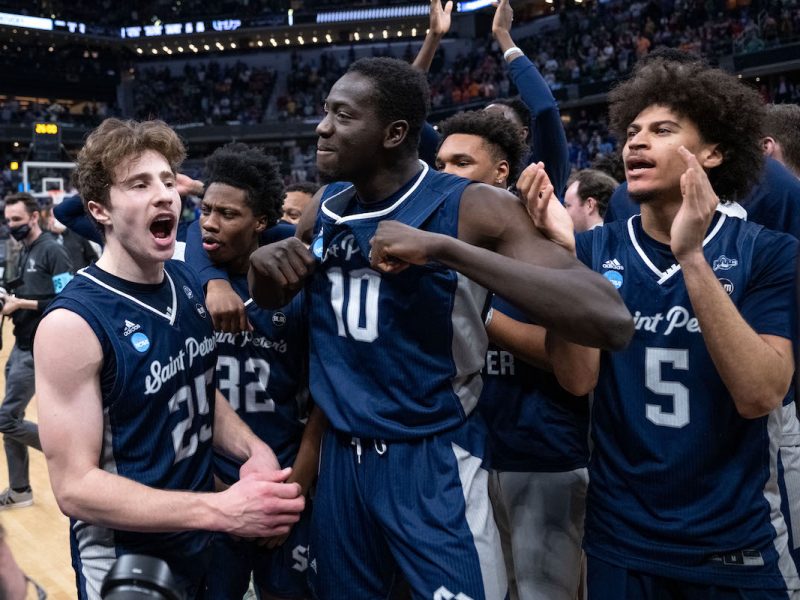 It’s madness! Day 1 of the men’s NCAA Tournament was pure chaos, and that’s what we like to see. Three overtime games, two 12-seeds playing spoiler and a pair of 13-seeds made things interesting. But the bedlam of March was abundant at one first-round site: Indianapolis. The bottom-left of your bracket (if that helps you) featured back-to-back overtime games that were wire-to-wire thrillers. Among them was the shocker of Day 1. Cinderella has been discovered, and she’s a peacock. The 15-seed Saint Peter’s Peacocks took down 2-seed Kentucky in a nail-biter (85-79, OT). Hours later, it was 7-seed Murray State who needed overtime to outlast 10-seed San Francisco (92-87, OT) on the same court. Brackets are busted, and the madness has begun.

Fun Fact: 0.004 percent (161 total) of brackets through ESPN’s Tournament Challenge are perfect after Day 1. A total of 31.9 percent (almost 1/3) of all brackets had Kentucky in the Final Four.

The second day of the first round puts 16 more games on display. Here are the matchups, upsets and players we’re keeping an eye on for the remainder of the opening round.

Upset Alerts: The 10-seed Loyola Chicago gets a shot at 7-seed Ohio State in today’s opener, and the Ramblers are tourney darlings from years past. Don’t sleep on 11-seeds from Virginia Tech and Iowa State — both facing 6-seeds with question marks. If we want to get really crazy, keep an eye on 15-seeds Jacksonville State and Delaware in the early sessions.

Players to Watch: Five Big Ten teams take the stage, so that means Kofi Cockburn (Illinois) and Purdue’s duo of Jaden Ivey and 7-foot-4 Zach Edey will be on display. Auburn’s Jabari Smith is a game-wrecker, and Duke’s Paolo Banchero could be poised to kickstart a monster tournament run.

CBS Sports: Winners & Losers From Day 1 of the NCAA Tournament