It’s the prelude to March as we go heavy on the hoops coverage to close out February. Don’t miss today’s special highlights section — all dunks, not all basketball. Intrigued?

The Final Tests for No. 1 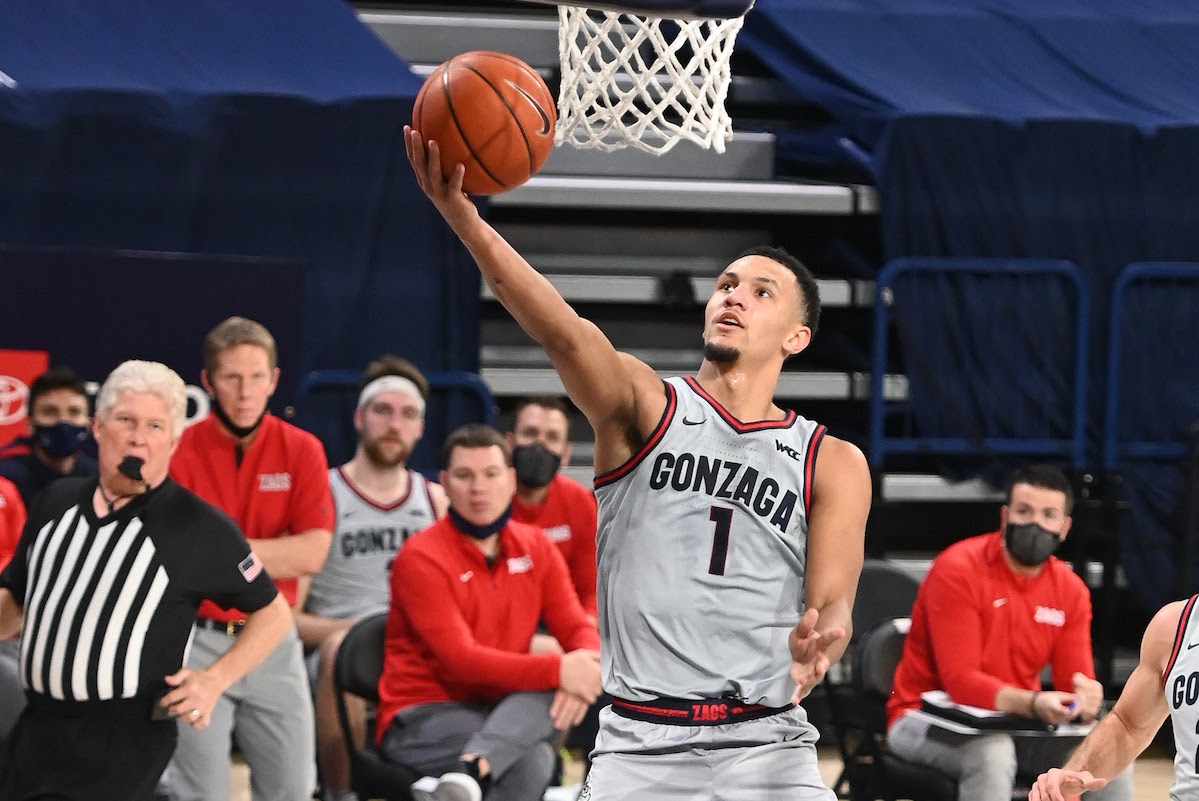 The top teams in college hoops came away simultaneous winners last night, and their final push for postseason supremacy is within reach. Both Gonzaga (men) and UConn (women) passed big tests, but a few games remain to reach the postseason as the No. 1 overall teams heading into March. Here’s the latest in our 1-seed watch:

The Zags had a scare last night against Santa Clara (89-75) after holding just a two-point lead at halftime, but they ultimately remained perfect (23-0). Saturday night’s season finale against Loyola Marymount is the final test, but BYU still poses a threat in the West Coast Conference tournament. Only one team has played Gonzaga to within 10 points all season long.

UConn and freshman phenom Paige Bueckers rolled Creighton last night (81-49) to secure the Big East title. The Huskies (19-1) have just two games remaining on the schedule, but the season finale against Marquette (17-4) is all that stands in their way between March and the No. 1 seed.

The Nets Are Scorching 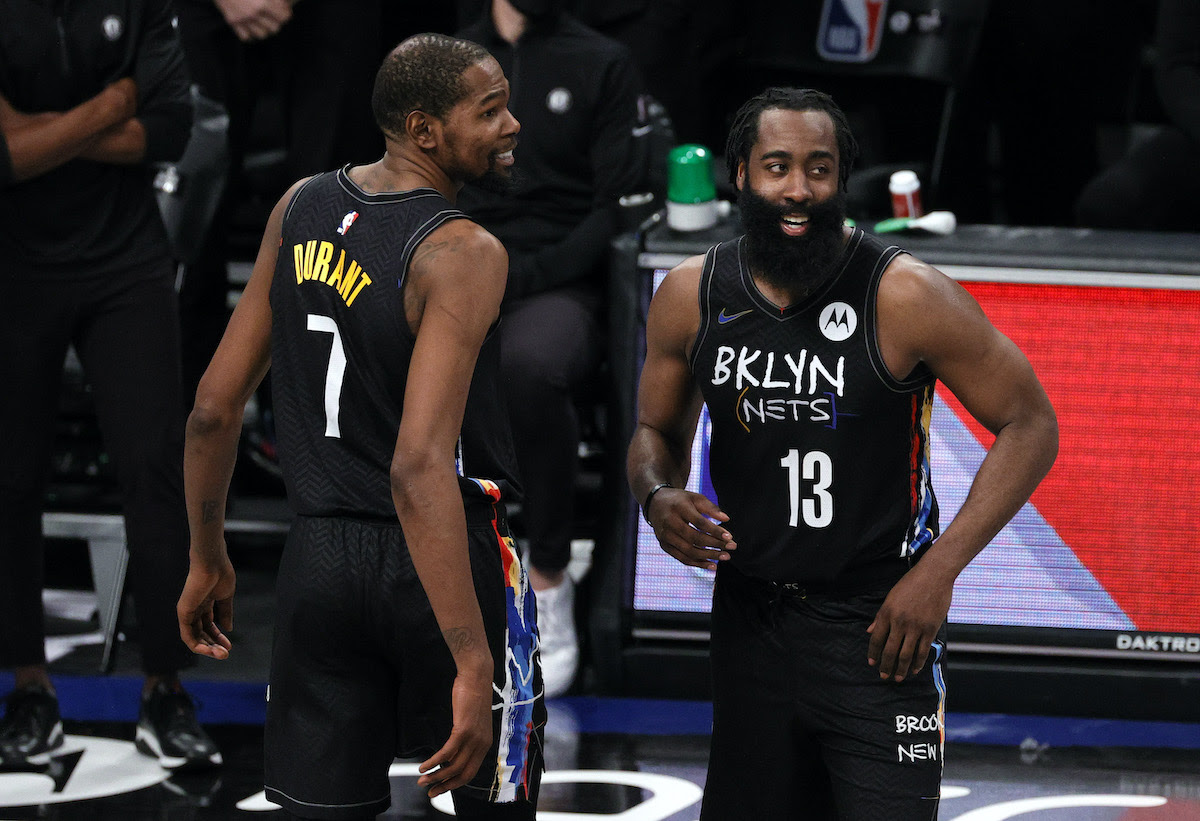 Just what everyone was afraid of. The Brooklyn Nets are the latest variation of an NBA super-team after acquiring James Harden, and they look absolutely ridiculous after a few early struggles. The Nets waxed the Magic last night by 37 (129-92) for their eighth straight win, including seven without Kevin Durant. Brooklyn’s offense has the potential to go down as the best in NBA history before the season ends. They’re averaging a league-high 121.2 points per game while shooting 50.1 percent on a nightly basis. No other team averages 120 and 49, respectively. Even the Utah Jazz — with the NBA’s best record — average 116.0 points and 46.9 percent.

The scariest part? The Big 3 of James Harden, Kevin Durant and Kyrie Irving have shared the court together for less than five full games.

Grizzlies Crush Clippers: Memphis handed L.A. their worst loss of the season Thursday night (122-94) thanks to a 4th-quarter runaway. The Clippers’ duo of Kawhi Leonard and Paul George only went for 30 points combined.

Zion vs. Giannis Was Epic: Two of the best power forwards in the world went head-to-head last night for a must-see highlight reel. Giannis Antetokounmpo (38 points, 10 rebounds) and the Bucks bested Zion Williamson (34 points, 8 rebounds, 6 assists) and the Pelicans in a tight finish (129-125).

Sixers Stall Luka & The Mavs: Philadelphia are winners of four of their last five after shutting down Luka Doncic and the Mavericks Thursday night (111-97). Doncic had one of his worst offensive nights of the year (19 points) with a +/- of -20. Philly still holds the top spot in the East.

Today’s highlights are a special all-dunk edition, and it’s not just basketball. Here’s a four-pack of Thursday’s must-see, dunkalicious moments.

Not sure who, or why, but Thursday’s viral social media post inspired today’s dunk-filled collection of highlights. Sportsletter Score: 7/10

The Illinois center is one of the largest men in college basketball, and he hammered this one down with authority. Sportsletter Score: 8/10

Hockey’s turn. Capitals’ star T.J. Oshie submitted his nominee with an epic deke-n-dive as he laid out to slam home the potential NHL goal of the year. Sportsletter Score: 9/10

Johnny Wilkes has sued the Los Angeles Clippers and Jerry West for his role in supposedly “luring” Kawhi Leonard to L.A. Wilkes is a friend of Leonard’s famous “Uncle Dennis.” His demands? Absurd. They include $2.5 million and courtside seats. (Yahoo! Sports)

ESPN’s NFL Draft expert Mel Kiper Jr. dropped his second edition of the 2021 NFL Mock Draft on Thursday. For the first time ever, it includes potential trades, as well some shocking twists at the top. (ESPN+)

The latest Premier League moves have seen many clubs heading in very different directions on current form. From surging and slumping giants to underdogs punching above their weight, here are the power rankings for the final 1/3 of the season. (NBC Sports)

The final weekend of February gives us a taste of what’s to come. Hint: It’s a near-endless list of college hoops so you can get started early on that bracket research. In pro sports, it’s a pick-five for the NBA and NHL’s hottest games this weekend. Enjoy the winter sports turn before March brings the madness, spring training and more.