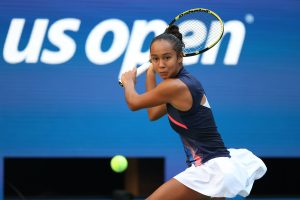 Leylah Fernandez’s dream run at the US Open continues! The 19-year-old Canadian took down #5 Elina Svitolina in a three-set tiebreaker Tuesday night at Flushing Meadows (6-3, 3-6, 7-6). Fernandez was also the one who sent home #3 Naomi Osaka in the third round. After taking down two top-five seeds as an unranked player, Fernandez became the youngest woman to defeat multiple top-five opponents at any major since Serena Williams in 1999. Fernandez also etched her name in history as the youngest woman ever to reach the US Open semifinals. Next up? She’ll face #2 Aryna Sabalenka for a spot in the final.

NY Times: The Teenagers Are Taking Over Tennis. That Might Not End Well