The Best Sho in Baseball 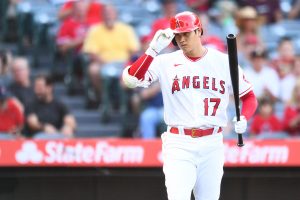 If Shohei Ohtani didn’t have the AL MVP award in the bag, he might now. The Angels ace crushed his league-leading 40th home run of the year in Wednesday’s 3-1 win over the Tigers. He also pitched eight innings — his deepest start to date — while fanning eight batters and giving up just one run. Ohtani (40) is now five up on Vlad Guerrero Jr. (35) and six up on Fernando Tatis Jr. (34) for the 2021 MLB home run lead. No one else has more than 30. MVP? Shohei can just about book it.

Freddie Cycles, Again: Braves 1B Freddie Freeman only needed six innings and four at-bats to hit for the cycle in last night’s 11-9 win over the Marlins. It’s Freeman’s second cycle for Atlanta, making him the first Braves player in franchise history to hit for the cycle twice.

Polanco Calls Game: Jorge Polanco’s walk-off single gave the Twins an 8-7 win over the Indians on Wednesday to cap a three-game home stand. Minnesota (54-67) is 6-2 in their last eight games, but their playoff hopes are basically gone.

Royals Eyeing the Sweep: Kansas City won its third straight game in a four-game series with the Astros last night when Hunter Dozier smacked a two-run shot in the 7th for a 3-2 lead. A play at the plate ended the game when Andrew Benintendi threw out Chas McCormick to seal the win. The Royals and ‘Stros will finish the series tonight as KC goes for the sweep.

Heaney Hurls Gem as Yankees Sweep: Three-up, three-down for the Pinstripes! New York’s Andrew Heaney went seven innings with just two hits and one run in the Yankees’ 5-2 win over the Red Sox last night as the Yanks swept the three-game series. New York (69-52) now holds the outright lead over Boston (69-54) in the AL East standings.