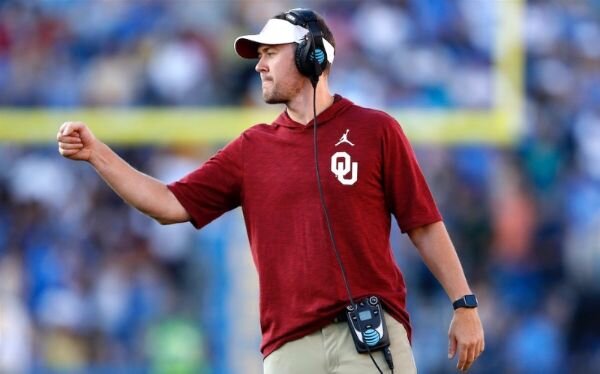 Those who can’t do, teach.

I hate that saying, but it certainly rings true for Oklahoma head coach Lincoln Riley. For the walk-on college quarterback turned offensive scientist, grooming young QBs is an art form.

You may know his Oklahoma offense is a high-powered scoring machine. You may know he’s a really young head coach. And you may have heard his name in rumors for upcoming NFL jobs. But here’s what you might not know about the man who is about to send his third straight QB to New York for the Heisman Trophy ceremony…

Lincoln Riley grew up in the small West Texas town of Muleshoe, just north of Lubbock and about five hours west of his current home in Norman, Oklahoma. A mere 6,000 people live in Muleshoe, and few go on to accomplish what Riley has.

Football is life in West Texas, but Riley wasn’t one of those five-star quarterbacks who was dealt a full-ride scholarship. Instead, he was a defensive end turned gunslinging captain in his senior year of high school, and he somehow walked on at Texas Tech.

Playing third-string behind then-QB Cliff Kingsbury — now the head coach of the Arizona Cardinals — Riley played one season before quitting the football team. Sort of.

He transitioned to a student assistant for head coach Mike Leach, and by his senior season, he was the wide receivers coach for some of the guys he shared classes with. Imagine that.

Riley had something special in his offensive mind. It took him less than a decade at Texas Tech and East Carolina to land the Offensive Coordinator role at Oklahoma under legendary head coach Bob Stoops. He was 30 years old and quickly becoming one of the hottest names in college football.

In 2017, Stoops stepped down and Riley became the head coach of the Sooners at 33 years old — the youngest FBS coach in the country. And not just at any FBS school, but a football juggernaut in Oklahoma.

In the last three seasons, that walk-on third-stringer from Muleshoe, Texas has done the unthinkable. He’s claimed three consecutive Big 12 titles with a conference record of 24-3, and he’s sent three consecutive quarterbacks to the Heisman Trophy Ceremony in New York. The first two — Baker Mayfield and Kyler Murray — won it. Then, they were drafted No. 1 overall.

No program had won back-to-back Heisman Trophies with two different players since Army in 1945-46. Riley’s first two QBs did it, and with Jalen Hurts, there’s an outside chance at a three-peat.

Now 36 years old, Riley’s resume has already check-marked the to-do list of a college football coach, and fast. There’s just one thing missing — a national championship. The Sooners have won 36 games in the last three seasons (12 each year) and reached the College Football Playoff each year, but they’re 0-2 in the CFP. And it’s not getting any easier.

The now-experienced Riley enters the College Football Playoff once again, and he’ll go against LSU and Ed Orgeron (58 years old) in a game that could be an all-time classic when it’s all said and done — a scoreboard-lighting shootout where first to 50 wins?

Win or lose — whether it’s Hurts in the Heisman race or LSU in the CFP — Lincoln Riley is proof… Proof that no matter where you’re from or how talented you are, sooner than later, an underdog finds a way.