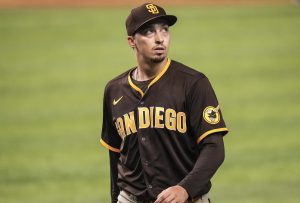 Blake Snell did his job for the Padres on Tuesday night, but a focus on the bigger picture may have robbed him of a historic night. The lefty pitched a no-hitter through seven innings against the Diamondbacks while striking out ten batters. Snell’s gem came to an end in the seventh-inning stretch after he threw 107 pitches, but he tossed a career-high 122 in his previous start. Two batters after Snell’s exit, Pierce Johnson gave up the first hit, and the no-hitter was no more. The Padres got the win over the D-backs (3-0), and they’re now tied with the Reds for the second wild card spot in the NL. But the record-setting ninth no-hitter of the MLB season will have to wait.

Wandering Into History: Rays rookie Wander Franco extened his on-base streak to 31 games, passing Mel Ott. Mickey Mantle (36 games) is the only AL player with a longer streak before the age of 21. The Rays beat the Red Sox on Tuesday, 8-5.

Toro Takes Astros Hearts: The Mariners and Astros were deadlocked in a 0-0 game before Abraham Toro crushed an 8th-inning grand slam. Mariners won, 4-0.

Vlad Cracks No. 39: One night after a 2-HR performance, Vlad Guerrero Jr. smacked his 39th homer of the year to take solo second behind Shohei Ohtani (42) in the home run race. The Blue Jays lost to the Orioles, 4-2.