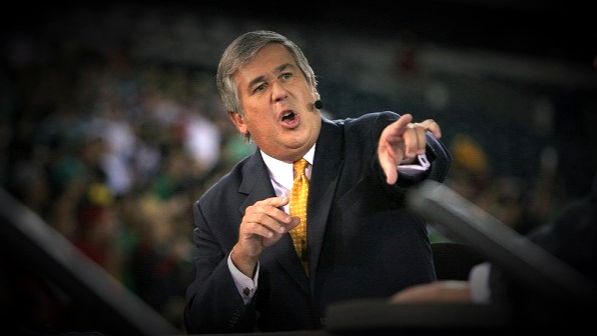 “There has never been an ESPN without Bob Ley… He will always be part of its history, its fabric, its essence. He will remain a beacon to all who follow, not only in Bristol but wherever journalism is practiced. Wherever it is valued.” – Jeremy Schaap

Bob Ley was inducted into the Sports Media Hall of Fame on Monday. Yesterday, he retired. ESPN’s longest-tenured broadcaster helped usher in a new generation of sports culture, and he was the standard of professionalism for many young sports journalists like myself.

Ley was a high school athlete from New Jersey who went to Seton Hall, studied sports journalism, and landed an on-air gig with a new sports network at age 24. He anchored the SportsCenter desk before hosting Outside The Lines from 1990 to today. A 40-year career at one company is a rarity most of us will never know. For that reason, Ley may not be the typical underdog, but he gave a voice, a platform, and a narrative to thousands of underdog stories.

From events of glory like the Miracle on Ice (1980) to tragedies like the Boston Marathon bombings (2013), Ley told every story with honesty, sincerity, and integrity. The most significant moments in 40 years of sports history, both in and outside the lines, were narrated by a man void of a hidden agenda. He didn’t become a persona, a brand, or a talking head driven by clicks. Instead, he let the stories, subjects, and the underdogs write history the right way.

The media – myself included – are just that; a medium… A channel through which events and stories become handoffs, and they rarely make it through unscathed. Someone usually drops the baton, but Ley never did.

“Bob has been our North Star and always kept us going in the right direction. He kept us honest. When you watched him you knew what you were getting, and you were getting it straight.” – Chris Berman

After 11 Sports Emmy Awards and a 40-year reel of narrating sports history, the 64-year-old Ley announced his retirement on Twitter Wednesday, but no, he never became a tweet taxi. He didn’t scrape the high trafficked roads of hot takes and opinions where sports journalists bankroll off large crowds, taking the masses for a ride. Instead of delivering us – the passengers – where we wanted to go, Ley took us where we needed to go.

You might be thinking: A sports anchor retired. Big deal.

“It’s time to take that vinyl off the turntable, flip it over, and drop the needle on the B-side. There are always great cuts and hidden gems on the B-side.” – Bob Ley