Houston, We Have A Walk-Off 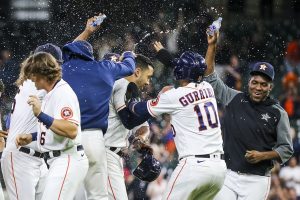 The Astros struggled to start September, but the AL West leaders are back on track thanks to a little drama Tuesday night in Houston. The ‘Stros trailed the Mariners (4-2) in the bottom of the 9th with one out before Alex Bregman crushed a two-run, game-tying home run to force extra innings. With a runner on second in the 10th, it was Alex Correa with a ground-rule double that walked it off. Now 81-57, the Astros are 6.5 games up on the rest of the AL West.

Franco Breaks Mantle’s Record: Rays rookie Wander Franco extended his on-base streak to 37 games with a walk in the 7th inning of a 12-7 win over the Red Sox. With the walk, Franco passed Mickey Mantle for the longest on-base streak in MLB history by a player under the age of 21.

Pujols Returns to STL: Albert Pujols made his first return trip to St. Louis on Tuesday donning a Dodgers uniform, and he didn’t waste his first plate appearance. The 41-year-old went yard in the 1st inning to kickstart a 7-2 Dodgers win.

Snell Goes No-No Into 7th: For the second time in as many starts, Blake Snell took a no-hitter into the seventh inning in the Padres-Angels clash. The eventual breakup sparked a two-run 7th for the Angels while Snell’s gem turned into a loss (4-0).