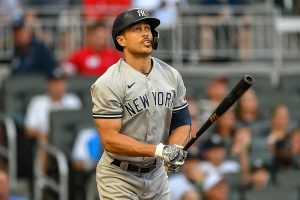 For the first time in more than 20 seasons, a pair of MLB teams faced off while riding nine-game win streaks, but only the Yankees’ win streak would remain. Giancarlo Stanton powered New York to their 10th straight victory with a 2-for-3 night that included a solo home run and a two-RBI double. That was about all the run support the Pinstripes needed as their pitching staff combined to give up just five hits and one run to the Braves for yet another tally in the win column (5-1). It’s the Yankees’ first 10-game win streak since last September when they reeled off a late-season push, and they’re putting pressure on the rival Red Sox as baseball enters the final 40 games.

Blue Jays Still Battling: The Blue Jays won a comeback in an AL showdown with the White Sox on Monday (2-1) thanks to Vlad Guerrero Jr.’s game-tying RBI (6th) and a home-plate steal on a wild pitch by pinch-runner Breyvic Valera.