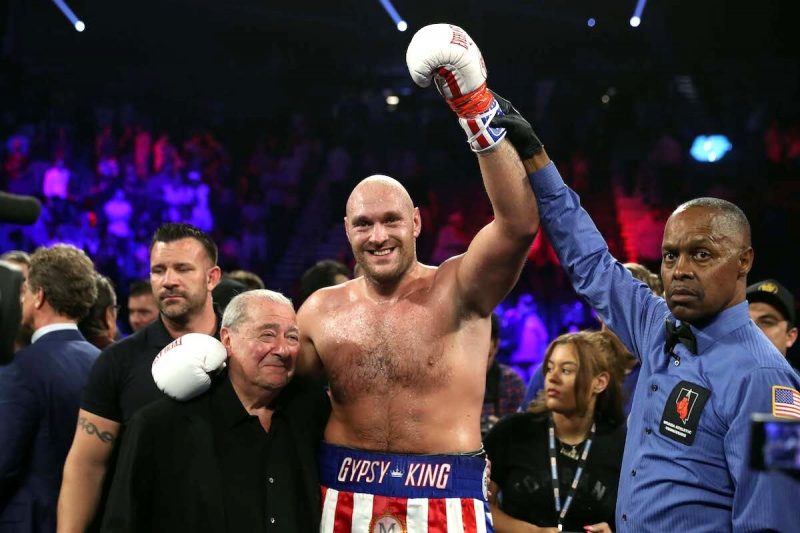 No matter what the scorecard says after 12 rounds, Tyson Fury has already won. He’s climbed to the top of boxing’s mountain only to crumble back to the canvas, survive the fall and get up again. What happens in the ring Saturday in Las Vegas? That’s simply a sporting event. For Fury, the prize is the fight itself. This is the story of The Gypsy King…

Tyson Luke Fury was born three months premature in 1988. He weighed 1 pound… One.

Doctors thought he was doomed, but his father John, a boxer in the UK, assured them his son would grow up to become one of the greatest fighters in the world. He named him ‘Tyson’ after Mike Tyson.

Fury’s rise through boxing ranks was anything but ordinary. He came from a long history of fighters in the Irish Traveller community where he self-proclaims the nickname “The Gypsy King.” The Irish Travellers have delivered some of the greatest boxers in the sport’s history, and they pride themselves on their boxing tradition. Fury aspired to become their king.

In 2009, Fury won his first heavyweight bout in the UK by decision. He had three more wins on his home turf in 2010, then the legend of The Gypsy King began to spread.

From 2011 to 2014, Fury won nine straight heavyweight fights. Seven of them featured a knockout. He was on the doorstep of a lifelong dream — heavyweight champion of the world.

In 2015, he took down reigning heavyweight champion Wladimir Klitschko and sat atop boxing’s heavyweight division. He claimed three of the four significant heavyweight belts (WBA, WBO, and IBF), but the WBC heavyweight title belonged to American Deontay Wilder. Then, Fury’s life took a punch.

After accomplishing his dream, Fury realized that being heavyweight champion wasn’t what he had imagined. He fell into drug and alcohol abuse before making multiple cries for help with suicide attempts. His heavyweight belts were stripped after months of inactivity. He became his own worst enemy — harder to defeat than any opponent in the ring.

“Nothing’s ever going to hit you as hard as life… There wasn’t a day that I woke up that I didn’t pray for death.” — Tyson Fury

Fury was long-dismissed from the sport as a man who’d fallen too far. After three years away from boxing, he sought help and opened up to others about mental health issues. He lost 140 pounds and staged a boxing comeback like never before.

At 6-foot-9 and 250 pounds, Fury remains undefeated at 29-0-1 (20 KOs). The lone draw came via split decision against Deontay Wilder (42-0-1) just 14 months ago in Fury’s attempt to take the WBC belt and complete the four corners of boxing glory. Many believed Fury should’ve won that fight, but Part II will settle the score.

Either way you split it, two boxing Goliaths will enter the ring on Saturday for the heavyweight division’s most-anticipated bout since Lennox Lewis and Mike Tyson in 2002. Get your popcorn ready.

A fall from glory put Fury back in the position that made him who he was — an Underdog. And hell hath no fury like an Underdog in the ring.