Darren Sproles: A Career of Purpose 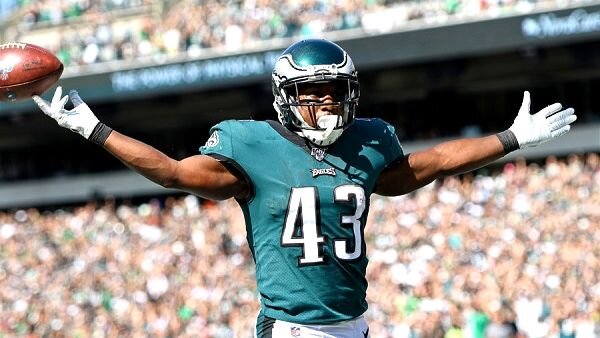 How the ‘Little Tank’ Changed Football

There’s something about the little guy with the big heart that sounds ‘The Underdog’ alarm. I have a soft spot for the undersized athlete that succeeds despite a vertical disadvantage. Today’s Underdog might be ‘goodbye’ to one of my sports heroes.

Like a fine wine, Darren Sproles seemingly got better with age. Inevitably, for all athletes, the bottle runs dry, and the tank finally empties. The 36-year-old do-it-all running back hit the season-ending IR last week – for the third straight season – and suggested this might be the end.

The Darren Sproles story is more than just a mighty football player in a miniature package. I met him once, briefly. It was hard to fathom that I was standing face-to-face (chin to forehead) with a pro athlete. And not just any pro athlete, but the fifth-ranked player in NFL history in all-purpose yards.

Number 43 made $43 million in his 15 NFL seasons, and he was never a starting running back.

At 5-foot-6, 180 pounds, Sproles was unlike any football player that came before him. His father gave him the nickname ‘Little Tank’ in peewee football. Sproles was so elusive in space, they had to change the rules to force him between the tackles.

“They sent me a memo that said the game wasn’t very fun for other kids. He was mercy ruling them so much.” – Larry Sproles (Darren’s Father)

Football was easy for Sproles, but he faced one major off-the-field challenge. If you watch a lot of sports, you might have trouble recalling a Darren Sproles interview. That’s because they’re rare. Sproles dealt with a stutter most of his life – a speech impediment that followed him through high school and college. He was teased and bullied at a young age because of it. But today, he helps kids who struggle with stuttering through school events, community foundations, and inspiration.

At Kansas State, Sproles was overwhelmed by the added media attention and interview requests, but he became the school’s all-time leader in all-purpose yards – rushing, receiving, returning. A foreshadowing of his NFL career.

With the Chargers in 2007, Sproles became the first player in NFL history to return a kickoff and punt for a touchdown in the same game – the first two touchdowns of his NFL career. He’d found his niche, and he excelled as a returner and situational running back behind some all-time greats, like LaDainian Tomlinson (Chargers), Mark Ingram (Saints), and LeSean McCoy (Eagles).

After a dozen years as the NFL’s swiss-army knife, the Little Tank started to run out of gas. Only one of his first 12 seasons was cut short by injury, but the last three have been devastating. In 2017, he tore his ACL and broke his arm in the same play.

Year after year, Sproles kept fighting to hang onto football, but he was never the same. He’s played less than six games and 100 snaps in each of the last three seasons, yet he’s still the active leader in all-purpose yards.

“Man, what a ride. I put my all in this game since the age of 8. I played every snap like it was my last. If I never put that #43 on again I have no regrets. I gave it my all and I hope I made my family proud!” – Darren Sproles (Instagram)

If this is the end, the oldest running back in the NFL will hang it up with 19,696 all-purpose yards (more than 11 miles). In what was one of his final games on October 6, he passed Tim Brown on that list. Only Emmitt Smith, Walter Payton, Brian Mitchell, and Jerry Rice have more.

Sproles redefined the position of running back. When he entered the NFL, most teams had a three-down feature back. The other two oldest active NFL ballcarriers are remnants of that model – Frank Gore (36), and Adrian Peterson (34) – and Sproles will finish his career with more yards than both.