Buc in the Backfield 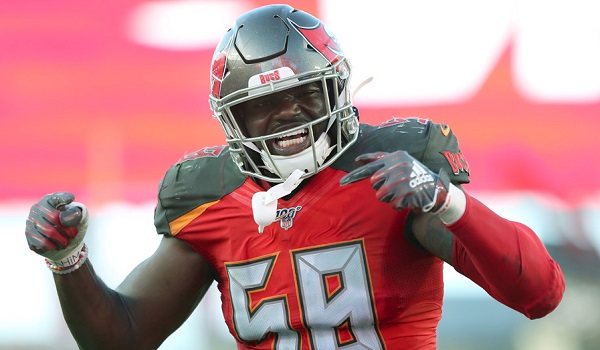 Shaquil Barrett is the undisputed NFL Defensive Player of the Year through four weeks. If you’ve been following closely, you know about the history he’s accomplished. He’s on pace for a record-shattering season, but he was on pace for something else a decade ago.

When Barrett was a teenager in Baltimore, discipline wasn’t in his DNA. He admitted to being lazy, skipping school, and even quitting football. He had a rough childhood in East Baltimore, and a lack of accountability caused Barrett to fall victim to his surroundings. When he was 15, he and a friend were robbed at gunpoint, and Barrett decided he’d had enough.

He left Baltimore to live with his brother Kevin in Boys Town, Nebraska, a village on the outskirts of Omaha that provides boys and girls with care and guidance. There, Barrett lived with his brother, several other children, and a married couple.

Boys Town also had a school, and yes, a football program. Barrett was a standout, but it was a small school with low visibility. His best scholarship offer was with Division II Nebraska-Omaha. He accepted it and played one season in 2010, but the school cut the football program one year later.

In 2011, Barrett was ready to do anything to keep playing; a drive to never give up that would serve him well later on.

After getting turned away by Nebraska and other Division I programs, Barrett received an offer from Colorado State. He won the Mountain West Defensive Player of the Year Award his senior season thanks to 12 sacks, two forced fumbles, and an interception. Even still, he went undrafted in 2014.

That could’ve been it, but Barrett refused to quit. He earned a spot on the Broncos practice squad thanks to a local connection, but he was cut twice.

In 2015, he made the active roster, spent four seasons in a rotational role and recorded just 14 sacks in four seasons (2015-2018) for an average of just 3.5 per year. But along the way, he learned from some of the Broncos’ sack specialists like Von Miller, DeMarcus Ware, and Bradley Chubb.

Tampa Bay signed Barrett to a 1-year, $4 million deal this offseason, and that might be the greatest bargain for a DPOY candidate, ever. After Week 4, Barrett’s stats are eye-popping: 20 tackles, three forced fumbles, one interception, and nine sacks. Nine…

The Bears paid Khalil Mack $141 million and he has 4.5 sacks through four games.

On Sunday, Barrett became the first player in NFL history to record eight sacks and an interception in the first four games of a season, but he wasn’t finished. With the Bucs leading the Rams 48-40 in the final minutes, Barrett stripped quarterback Jared Goff, and teammate Ndamukong Suh ran it back for a touchdown. Another forced fumble. Another sack. Another victory for the lazy teenager who played Division II.

Barrett is on pace to make 36 sacks by the end of the season. Michael Strahan holds the current single-season sack record, and that number is 22.5. Shatter it, Shaq. Shatter it for the underdogs.