Tuesday featured a 1-2 punch for the Americans that stole the show on the track. But as the Olympics near the final weekend, it’s the USA and China in a dead heat for the overall medals race. Only four days left. 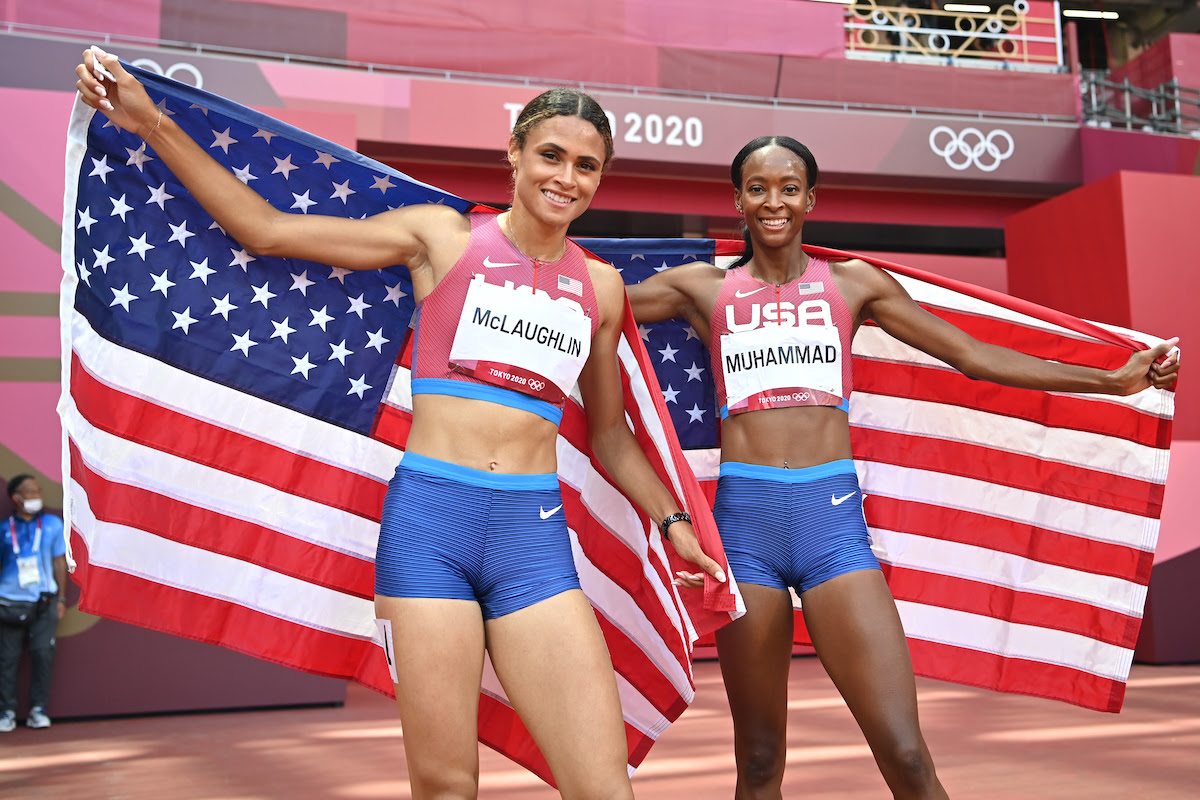 The women’s 400-meter hurdles were Team USA’s shining track and field event on Tuesday in Tokyo as Americans Sydney McLaughlin and Dalilah Muhammad took gold and silver, respectively, in a must-see finish. McLaughlin topped her own world record of 51.90 seconds by nearly a half-second (51.46) while Muhammad came in at a personal-best 51.58 seconds. Muhammad was the reigning gold medalist in the event from 2016, but McLaughlin now owns the title of the world’s fastest female hurdler.

“Iron sharpens iron. People can call it whatever they want to call it; it’s two great athletes pushing each other to be better. There’s no animosity or hard feelings. It’s just two people trying to be their best. We wouldn’t be able to have these world records go back and forth without one another.” — Sydney McLaughlin

Team USA gymnast Simone Biles returned to the Olympic action on Tuesday for one more go in her final event after withdrawing last week due to mental health challenges known as “the twisties.” She delivered a stellar performance in the balance beam finals, taking home the bronze on her way out of Tokyo.

American Athing Mu dominated the women’s 800-meter race on Tuesday with a blistering time of 1:55.21. The 19-year-old earned her first gold medal, and she became the first American woman to win gold in the 800-meters since 1968.

The USA baseball team staved off elimination on Wednesday morning with a 3-1 win over the Dominican Republic. Red Sox prospect Tristan Casas opened the scoring with a two-run homer in the 1st inning. The USA added an insurance run from Tyler Austin in the 5th. The U.S. advances to the semifinals on Thursday (6:00 am ET) against the loser of South Korea and Japan (in action this morning).

Two iconic futbol countries will meet in the finale this weekend after a pair of scintillating semifinals matches on Tuesday. Spain knocked off Japan (1-0) thanks to Marco Asensio’s extra-time winner (115’). A few hours later, Brazil sent Mexico packing with a penalty-kick shootout victory (0-0, 4-1 PKs). Both Spain and Brazil will face off on Saturday (7:30 am ET) for the gold medal.

The United States volleyball squad is into the semifinals after a straight-set victory over the Dominican Republic Wednesday morning. Team USA will await the winner of Serbia and Italy for Friday’s semifinals, but they’ll be without injured starters Jordyn Poulter and Jordan Thompson.

*Not all links to highlights due to late-morning schedule. 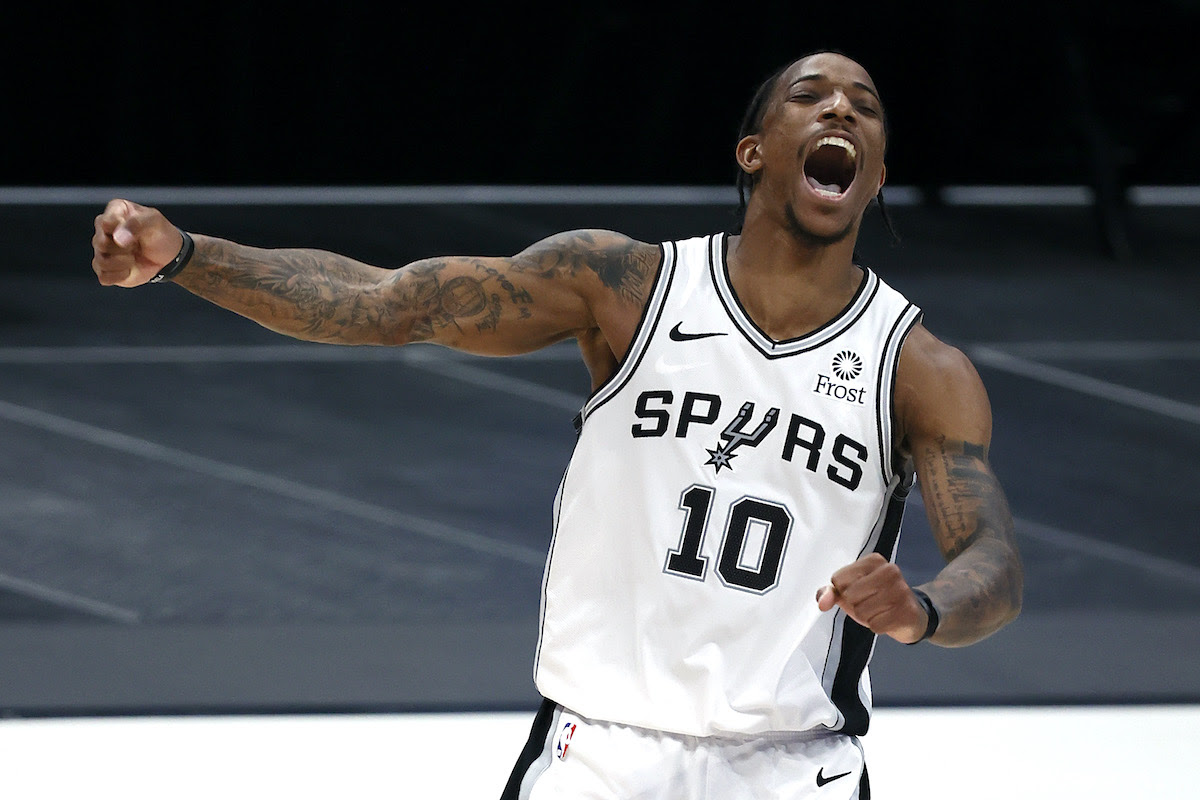 Day 2 of NBA free agency brought another star to Chicago and a reunion in Los Angeles. The Bulls — one day after adding Lonzo Ball and Alex Caruso — landed another guard in DeMar DeRozan via sign-and-trade. Add those three with Zach LaVine and that’s a loaded backcourt. Meanwhile, the Lakers’ veteran signings continued with the addition of Carmelo Anthony. Melo and LeBron James will get to team up for the first time in their careers. The news keeps rolling in. More free agents to come, but here’s the latest:

The Ringer: It Pays to Be Old on This Year’s NBA Free-Agent Market

NBA: Free Agency Tracker: Every Reported Deal for All 30 Teams

When Bronze Means More Than Gold

Simone Biles returned to the Olympics on Tuesday morning for the balance beam final after withdrawing from competition due to a mental health block. Her decision highlighted the importance of athletes’ mental health, and she says this bronze medal means more than all her golds. (NBC News)

The Perfect Captain for an Imperfect Team

Kevin Durant is many things — his business and philanthropic efforts are vast — but first and foremost he is a basketball player. This isn’t a job. This is his life. He is, perhaps, the ideal leader for this less-than-ideal USA Basketball roster competing under less than ideal circumstances here at the Tokyo Olympics. (Yahoo! Sports)

The Next Wave of World-Class Stars

When a sports legend moves on, it creates a void, and we are seeing that in Tokyo. Usain Bolt is gone from the track program, Michael Phelps retired from swimming post-Rio, and the Olympic beach volleyball tournament is taking place without Kerri Walsh-Jennings for the first time since 1996. The next wave of talent is now emerging. (FOX Sports)

It’s time to recruit some new team members. Now, when you share The Sportsletter with family and friends using your unique Team ID (unique referral link), you’ll get rewarded with team gear. Rack up the points to climb the ranks and prove you’re a superstar.SHARE SPORTS, GET REWARDS

Get Your Team ID