Golf is getting another celebrity match-play event (see below). The trash talk has already begun, and we love it.

Memorial Day Weekend is around the corner. Don’t miss tomorrow’s preview of the 105th Indianapolis 500, the Champions League Final and more on the way this holiday weekend.

The Match (Part III) is Coming 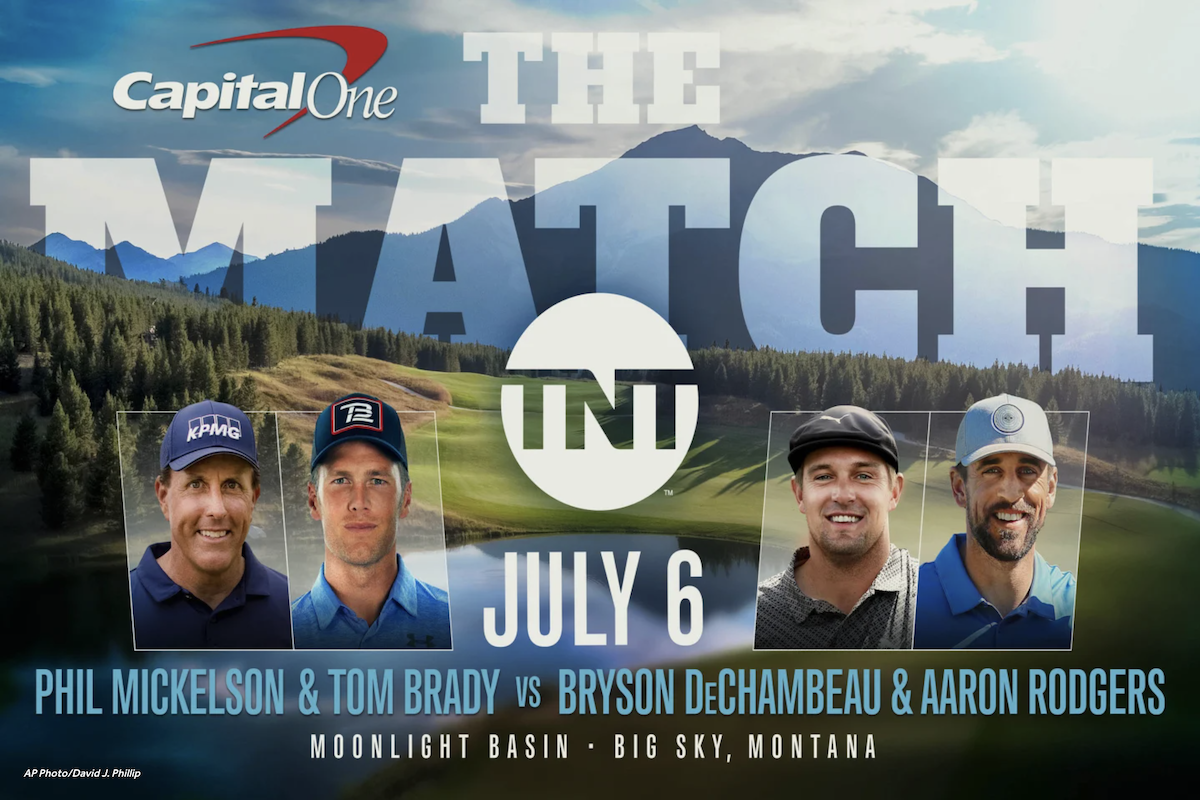 Here we go again! The new tradition of celebrity golf challenges gets another chapter this summer. The Match (Part III) features familiar teammates Phil Mickelson and Tom Brady against a new set of challengers — Bryson DeChambeau and Aaron Rodgers. Mickelson previously took on Tiger Woods in the first rendition of The Match. In Part II, it was Mickelson and Brady against Woods and Peyton Manning.

Phil Flying High: The announcement comes just three days after Mickelson’s historic win at the PGA Championship where he was a 200-1 underdog. Brady congratulated Phil on Twitter after the win, to which Mickelson responded by praising Brady’s longevity and ability to perform at a high level well into his 40s. Both Brady and Mickelson are shining examples of defeating father time in sports, and now they’re adding Rodgers to the show. The Green Bay Packers quarterback is currently holding out after making celebrity appearances at the Kentucky Derby and as the guest host of ‘Jeopardy!’. 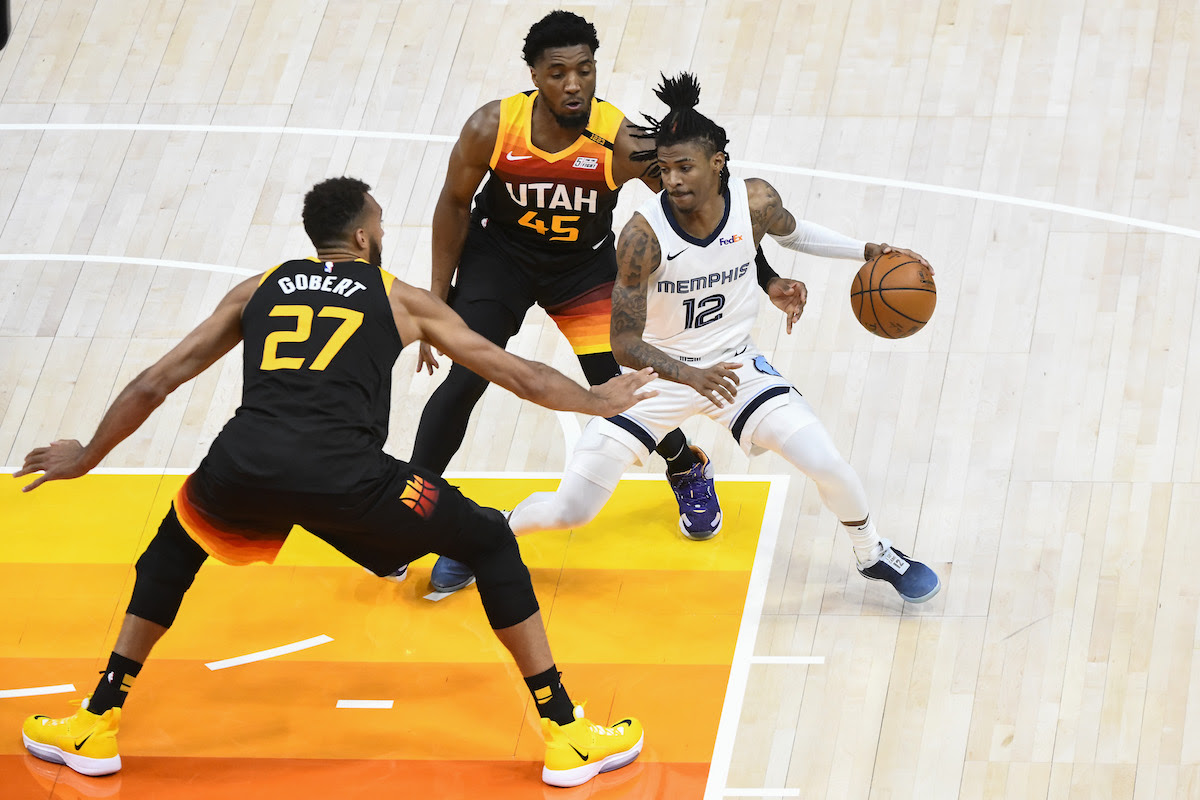 What a weird, wild and historic night in the NBA Playoffs. Both 1-seeds were winners, the Knicks rocked out at MSG, and Philly fans were throwing popcorn… on players. Let’s not forget: Ja Morant had 47 points in his second-ever playoff game, but in a losing effort. Lots to unpack and little time, so let’s run it back.

The 1-seed Sixers cruised to another win in Game 2 behind 22 points apiece from Joel Embiid and Ben Simmons, but the story of the game was Russell Westbrook’s popcorn incident. As he was limping back to the locker room with an ankle injury, a fan dumped popcorn on him through the tunnel. Westbrook lost his cool and the fan was ejected. PHI Lead Series (2-0)

The Knicks delivered in Game 2 with the franchise’s first playoff win in Madison Square Garden since 2013, but it didn’t come easy. New York trailed Atlanta by double digits until a third-quarter swing (32-18). They poured it on in the 4th in front of a raucous MSG crowd, holding the Hawks to just 35 second-half points. Derrick Rose led the way with 26 off the bench. Series Tied (1-1)

The return of Donovan Mitchell (25 points) brought some much-needed assistance to the Jazz after a Game 1 upset by the Grizzlies. Utah’s scoring was off the charts in Game 2, including seven players in double figures. Grizzlies guard Ja Morant (47 points) did all he could to mount a comeback, but the Jazz held on. Series Tied (1-1)

Fun Fact: Ja Morant’s 73 points in his first two career playoff games is the second-most all time behind George Mikan (75). Luka Doncic (70) is third on the list.

Yardbarker: Madison Square Garden is Off the Rails for Knicks 1st Playoff Win in 8 Years

The Champs Move On ⚡️ 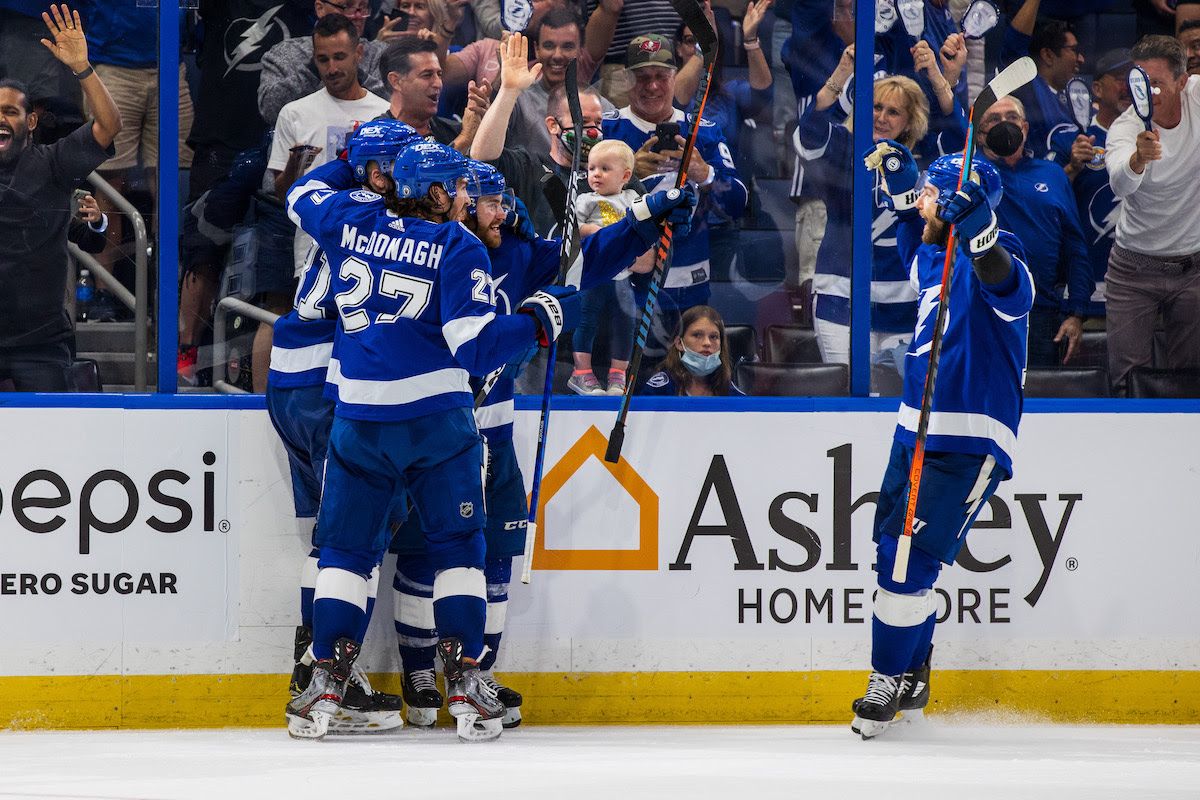 Two more teams advanced to the second round of the Stanley Cup Playoffs on Wednesday night, and one of them is the defending champs. Meanwhile, the Minnesota won its second straight to force the first Game 7 in the NHL postseason after trailing the series 3-1. We’re one step closer to the Stanley Cup Finals.

A no-doubter in Florida… The defending Stanley Cup champions shut the door on the Panthers with a 4-0 shutout in Game 6 behind Andrei Vasilevskiy’s 29 saves. Brayden Point scored a nifty goal while Steven Stamkos had a goal and an assist. The Lightning await the winner of the Hurricanes-Predators series. TBL Win Series (4-2)

The Islanders were flirting with a Game 7 after trailing the Penguins (3-2) in the second period, but Brock Nelson had other plans. The Isles’ center had a pair of goals and an assist to turn the tables and send New York on to Round 2. They’ll face the Bruins next. NYI Win Series (4-2)

Let’s go seven! The Wild shut out Vegas on Wednesday night to force Game 7 after trailing the series 3-1. All three Wild goals came in the third period. Game 7 will be Friday night (9:00 pm ET), and the winner gets the Avalanche next. Series Tied (3-3)

The L.A. Dodgers entered Wednesday riding an eight-game win streak, but the Astros snapped it with a 5-2 win. Two of the infamous Astros, Jose Altuve and Carlos Correa, hit home runs to end a four-game skid of their own.

The Aces and Mercury were the lone WNBA game in action on Wednesday, and the battle of the desert was a thriller ’til the very end. Las Vegas won it (85-79), but the Aces’ Jackie Young (27) and the Mercury’s Britney Griner (27) put on a show.

Outshot and out-possessed, but not outplayed. The Spanish club Villareal upset Manchester United in the Europa League finale on Wednesday. The match needed full time and then some after a 1-1 draw before Villareal won a thriller in penalty kicks (11-10).

Did Trump Try to Save Patriots From Spygate?

In the Spring of 2008, the NFL was in crisis… A hard-charging United States senator from Pennsylvania named Arlen Specter had launched an investigation into the Spygate scandal. He tried to determine how many games the New England Patriots illegally won, and why commissioner Roger Goodell had destroyed the evidence. Now, there’s a theory… (ESPN)

Laws related to name, image and likeness, or NIL, will shatter the basic concept that has defined the NCAA model for more than a century: that student-athletes cannot be reimbursed in any form for participating in athletics. Here’s how the dramatic change will impact college sports. (USA Today)

️ Brooks vs. Bryson is Exactly What Golf Needs

With Tiger Woods out of the game at the moment, the best possible thing that could’ve happened to the golf world took place over the weekend. And I am not talking about Phil Mickelson winning a major at the age of 50… I’m talking about the growing feud between Brooks Koepka and Bryson DeChambeau. (FOX Sports)