Congrats to The Sportsletter Bracket Challenge winner, Greg D., and everyone who correctly picked Baylor to win it all. Email us with your name (first and last) and bracket entry name from the email corresponding to your bracket account to claim your prize. 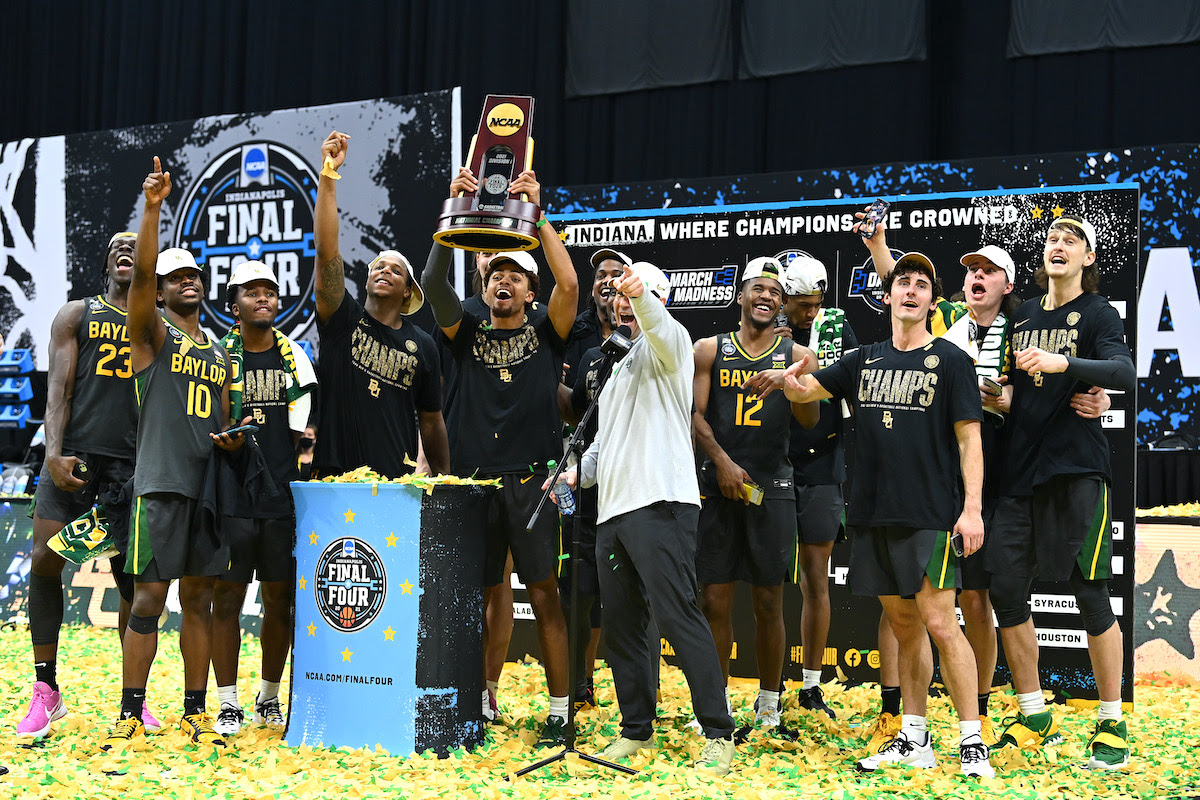 One game from perfection, but not to be. The Baylor Bears are your 2021 NCAA National Champions after stomping undefeated Gonzaga from wire-to-wire in Monday’s title game. Baylor opened up a 9-0 lead in a matter of seconds, turning over the Zags seven times in the first 10 minutes, and burying seven of their first ten 3-point attempts. The Bears never let the lead dwindle below nine points after those first ten minutes, thwarting every Gonzaga run and responding with a run of their own. Head coach Scott Drew, after taking over 18 seasons ago, finally delivered Baylor its first title. Green and yellow confetti fell to the floor of Lucas Oil Stadium, and our first men’s NCAA Tournament champion in two years has finally been crowned.

NCAA Championship (By the Numbers)

Baylor’s M.O. all season long has been guard play, including their three stars Davion Mitchell, MaCio Teague, and Jared Butler, plus Adam Flagler coming off the bench. Those four players combined for 69 of Baylor’s 86 points, and they shot a combined 10-for-20 (50%) from 3.

Pulling the Plug on Perfection

The Bears become just the second team from the state of Texas to win the NCAA Championship (Texas Western, 1966). After 55 years, the Lone Star State hangs another banner. Congrats to the Baylor Bears!

NY Times: How Baylor Beat Gonzaga for the National Championship

B/R: The Top 10 Plays From the Men’s NCAA Title Game

ESPN: Gonzaga Faltered, But Its Rise Remains One of College Basketball’s Amazing Tales 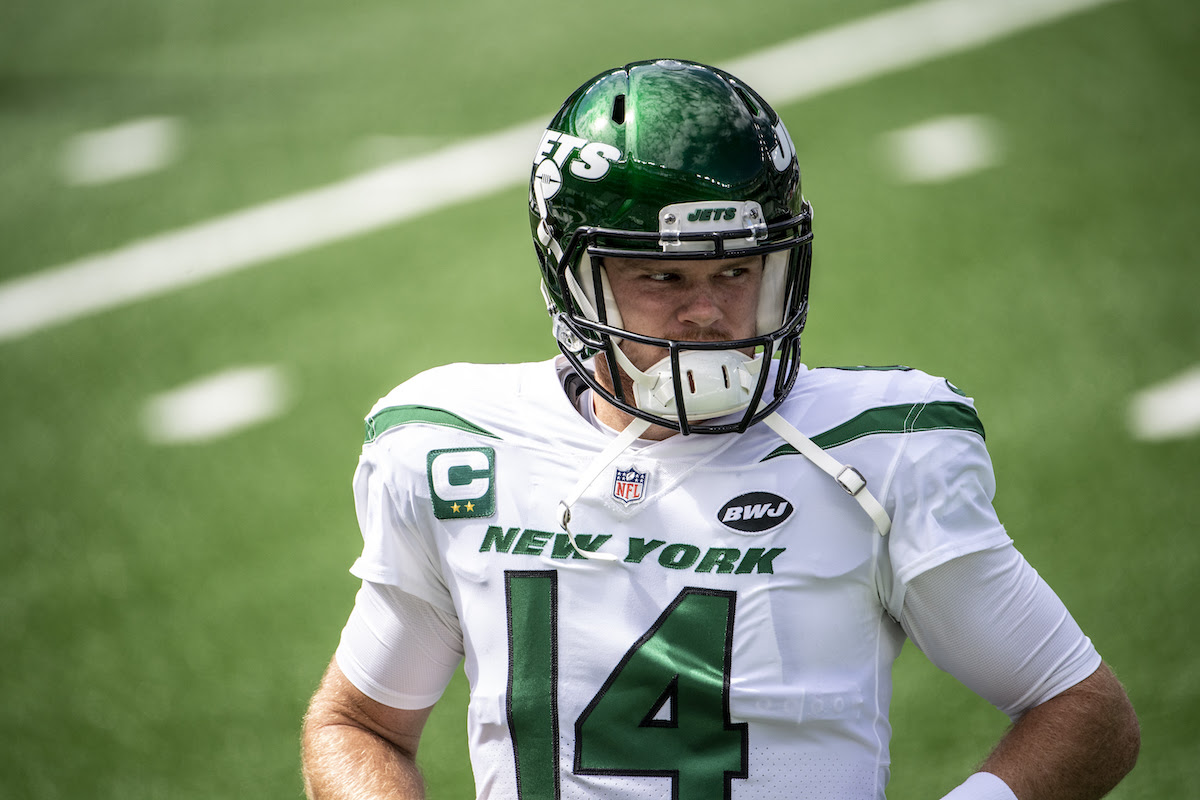 Another headline-grabbing trade moved the needle on the QB carousel in the 2021 NFL offseason. The Carolina Panthers acquired QB Sam Darnold from the Jets on Monday. In return, New York received three draft picks, including one in this month’s draft. Darnold spent his first three NFL seasons in Gang Green, amassing a record of just 13-25 with 8,000 yards, 45 TDs and 39 INTs. His 72.7 passer rating ranked 36th among 36 eligible QBs in 2020 (five or more games). Darnold was the No. 3 overall pick in 2018.

The Jets (No. 2) and Panthers (No. 8) both retain their 1st-round picks in this year’s 2021 NFL Draft. All signs now point to New York selecting QB Zach Wilson (BYU) or QB Justin Fields (Ohio State) with the No. 2 overall pick.

A Packed House in Texas 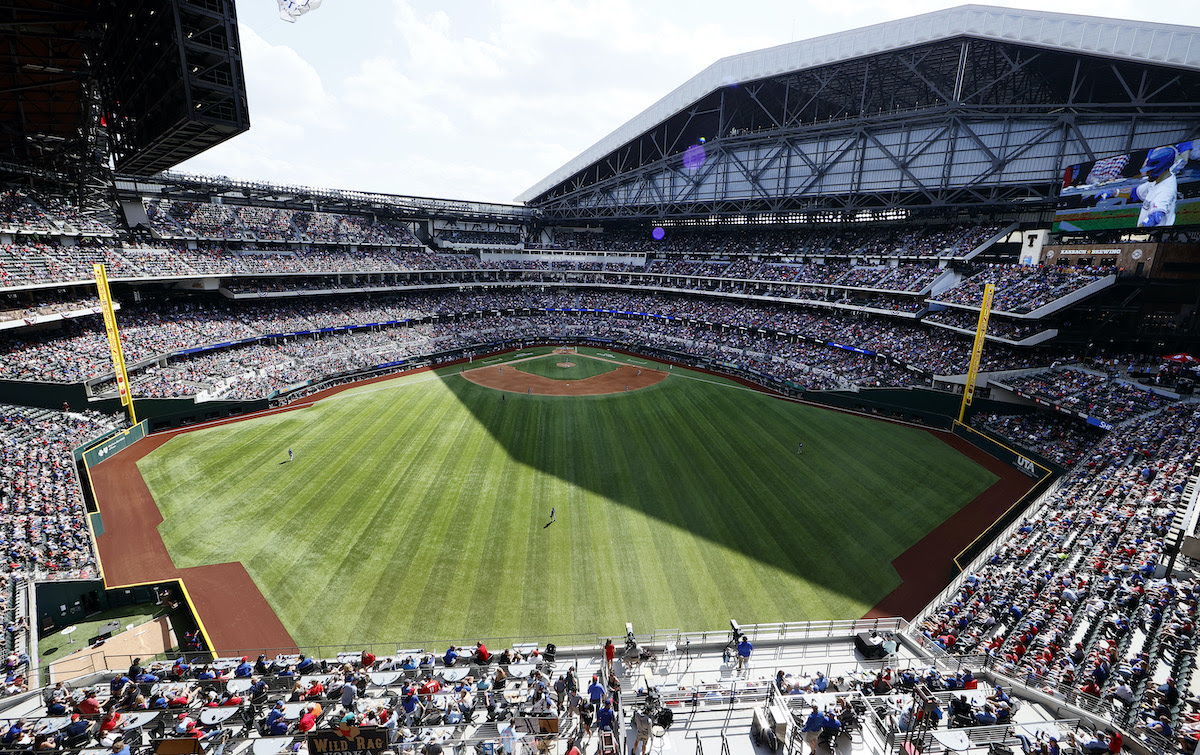 A milestone moment in sports. Monday’s home-opener for the Texas Rangers was a sight that hasn’t been seen in more than 385 days. Globe Life Field in Arlington, Texas allowed 100 percent capacity for its first regular-season game as it played host to the largest in-person gathering since the pandemic began. A total of 38,238 fans filled in, and there was hardly an empty seat in the house (full capacity: 40,300).

The Rangers lost the game to the Blue Jays (6-2), but it felt like a small win for sports in the long-awaited return to normalcy.

“Fantastic. It felt like a real game. It was loud. It was an awesome atmosphere. 2019 seems like an eternity ago… We were fired up. The dugout was fired up.” — Rangers Manager Chris Woodward

CNN: Texas Rangers Sell Over 38,000 Tickets Marking One of the First Full-Capacity Sporting Events in a Year

The Nets and Knicks met for the second time this season on Monday, but it was Kyrie Irving’s night with 40 points in a 114-112 win for the Nets. Brooklyn won it on a pair of free throws by Jeff Green inside five seconds.

Giancarlo Stanton blasted a 471-foot no-doubt grand slam last night against the Orioles to help the Yankees win a shutout (7-0) and hand Baltimore its first loss of the season.

Ten days after being traded from the Sabres to the Canadiens, Eric Staal made his Montreal debut and didn’t disappoint. The 36-year-old veteran center notched an OT winner to beat the Oilers (3-2).

It’s a full-circle moment for Aaron Rodgers when his 10 episodes behind the lectern at “Jeopardy!” begin airing Monday. The Green Bay Packers quarterback was a contestant in 2015, and now he’s among a roster of celebrity hosts filling in after the death of Alex Trebek. (USA Today)

Here we go. The latest Erling Haaland transfer news is unfolding as his agent Mino Raiola tours Barcelona and Real Madrid. There’s a bidding war for the 20-year-old striker from Borussia Dortmund, and it’s just getting started. (CBS Sports)

Enjoying The Sportsletter? SUPPORT THE TEAM