Cinderella’s Not Done Yet

The west coast has put its stamp on the Final Four. Gonzaga and UCLA are moving on. We’re three games away from a winner. The Bruins get The Underdog spotlight tomorrow…

From First Four to Final Four 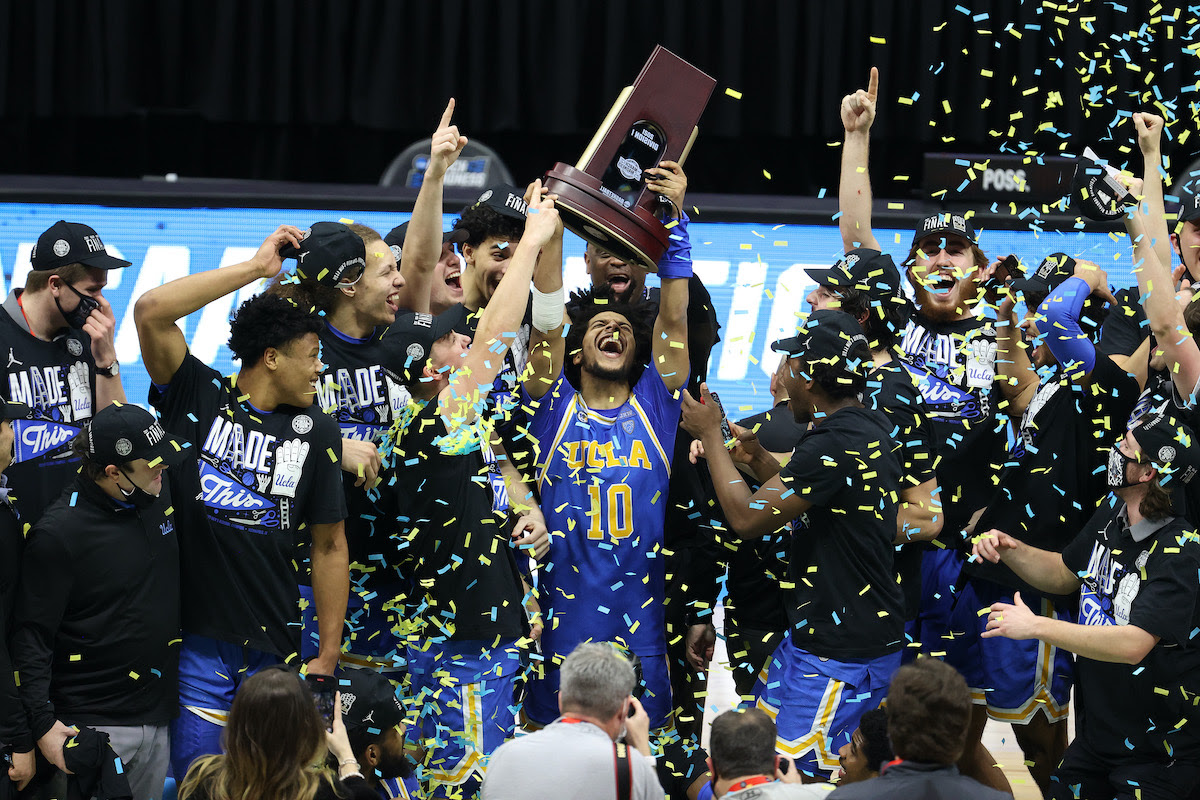 After Monday’s first two entries to the men’s NCAA Final Four came from the state of Texas, Tuesday’s ticket-punchers hailed from the west coast — one favorite and one massive underdog. Top-seeded Gonzaga bulldozed another opponent, and 11-seed UCLA shocked 1-seed Michigan to make Final Four history. They’re the second team ever to go from the First Four play-in round all the way to the promised land. Let’s get at it!

The perfect run continues (30-0). The Zags grabbed a 7-0 lead in the blink of an eye before leaving USC in the dust Tuesday night. Gonzaga shot 50 percent from the floor thanks to a combined 59 points from the trio of Drew Timme (23), Corey Kispert (18) and Jalen Suggs (18). They reach their second Final Four in school history riding a 27-game double-digit win streak — the longest such streak in 60 years.

It was another stunning upset for California’s Cinderella story in the late game. The Bruins stymied the Michigan offense while Kentucky transfer Johnny Juzang (28 points) single-handedly took over for UCLA. Michigan missed its last eight field goal attempts down the stretch, including two good looks from 3 in the final seconds. UCLA becomes the second team ever to go from First Four to Final Four, and they’re the fifth 11-seed in Final Four history. None of the previous four made the championship game.

Fun Fact: UCLA lost its last four games of the regular season. They’ve now won five in a row in the NCAA tourney.

USA Today: Will Anyone Stop Gonzaga? 3 Takeaways From the Thrashing of Southern Cal 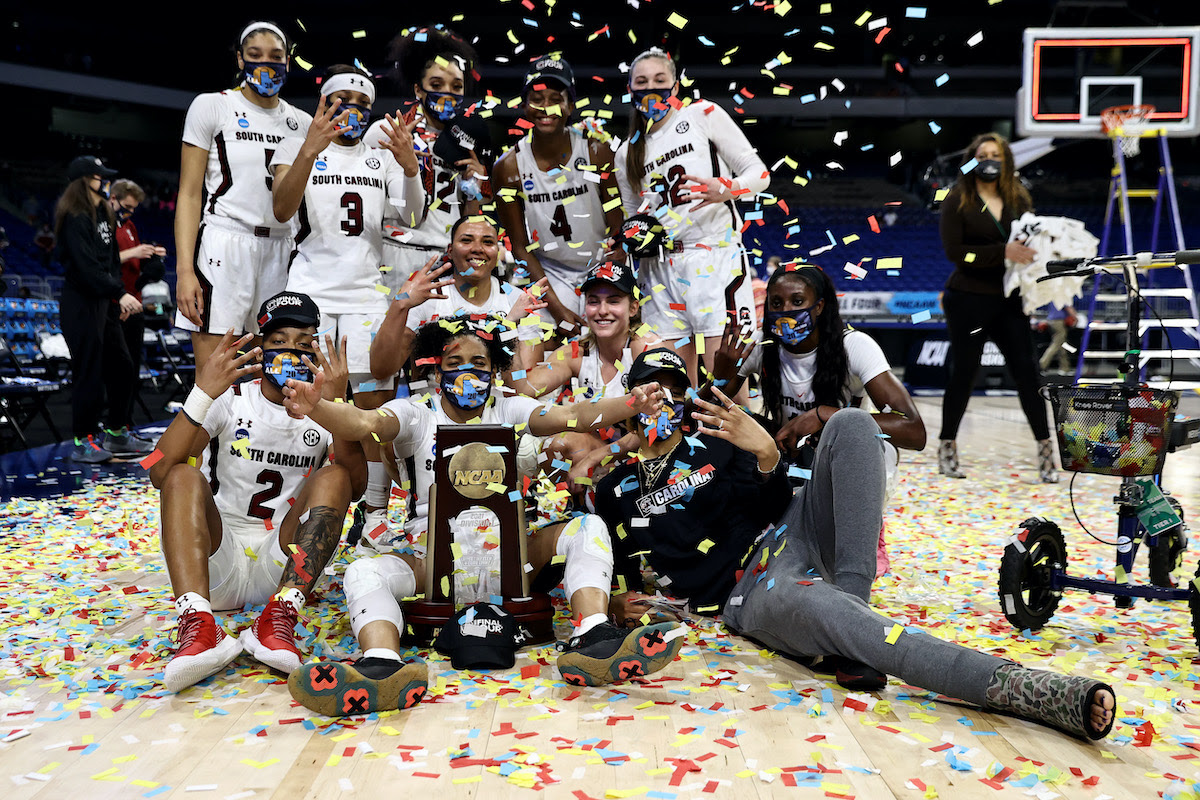 It was a tale of two tapes in the women’s Elite Eight matchups on Tuesday. South Carolina put a hard stop to the deep run from 6-seed Texas, but Stanford needed a second-half boost to send Louisville packing. Either way, two more 1-seeds join #1 UConn and #3 Arizona in the Final Four.

The road ends here for 6-seed Texas. The Longhorns made the deepest Cinderella run of any team in the women’s tourney, but South Carolina was just too much. The Gamecocks had five players in double figures while holding Texas to a 23-percent shooting night that included zero — yes, zero — points in the fourth quarter. That’s never happened in NCAA women’s tournament history. Dawn Staley and South Carolina are heading back to the Final four for the third time in six years.

We’re still curious what Stanford head coach Tara VanDerveer said at halftime. The Cardinal vs. the Cardinals was a tale of two games. Stanford fell behind 38-26 after two quarters before exploding for twice as many points in the second half. They outscored Louisville 52-25 in the final 24 minutes, and it was lights out for Louisville. Lexie Hull (21 points, 9 rebounds) led the Stanford charge, and VanDerveer’s squad is going back to the Final Four for the 14th time with only two championships in the bag (1990 & 1992).

Game 17: Coming to an NFL Arena Near You 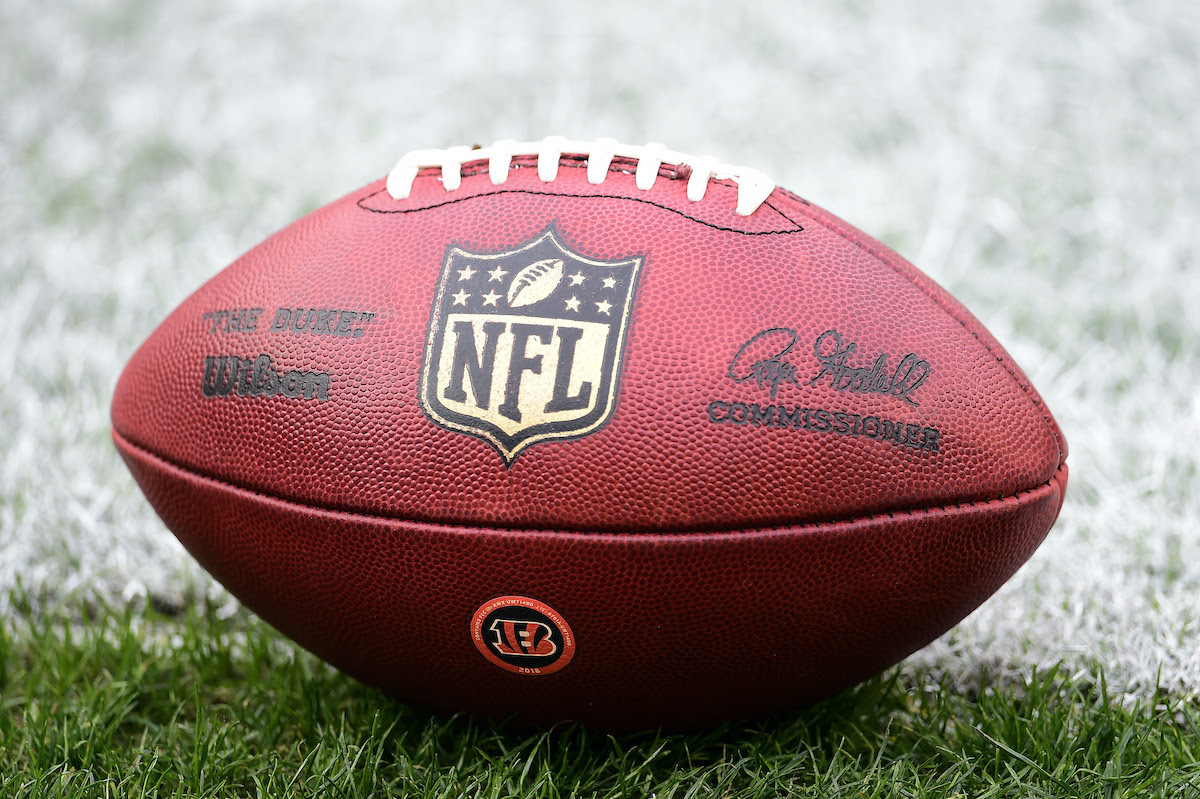 More football is on the way! The NFL owners officially voted on Wednesday to confirm an additional 17th regular-season game beginning next season. The long-expected announcement comes after players agreed to the 17th game in the 2020 collective bargaining agreement.

Why It Matters: That one extra game may not seem like much, but a full slate of 16 NFL games means a significant revenue increase for the league — roughly $120 million. The move comes just one year after the new playoff format, which also adds an additional round of games. Meanwhile, the league is shortening the preseason from four games to three. And let’s be honest, we’re all fine with a shorter preseason.

However, some players aren’t fans of the additional game…

NBA: A Nod to the New-Look Nuggets

The Nuggets won their third straight game since their upgrades at last week’s trade deadline. Denver took down the Sixers (104-95) behind a combined 78 points from Michael Porter Jr. (27), Jamal Murray (21) and Nikola Jokic (30).

NHL: Tolvanen Tallies No. 6 for Preds

Eeli Tolvanen played hero for the Predators Tuesday night with an OT winner that lifted them to a win over the Stars (3-2, OT). That’s six wins in a row for Nashville and a league-best 8-2-0 in their last 10.

The Miami Open is nearing its conclusion as the matches roll into the quarterfinals today. Many of the big names and top seeds are still swinging, but American Sebastian Korda struck down (5) Diego Schwartzmann in the men’s draw on Tuesday.

The Dodgers may still be in a tier of their own, but which teams can come close to challenging the defending champs this year? (The Ringer)

Things got interesting real fast last Friday. It was all very dizzying in real time. The 49ers, Dolphins and Eagles shook up the draft order. This week’s mock draft is three rounds deep. (CBS Sports)

️ The NCAA Has Its Day in Court

Nearly 12 years of non-stop antitrust challenges to the NCAA’s athlete-compensation rules will reach a momentous occasion Wednesday when the Supreme Court hears arguments in the NIL debate. (USA Today)

Creator of NBA Top Shot Gets $305 Million in Funding