After six days, the Ravens-Steelers game is finally on (3:40 pm ET). It’s only the second Wednesday NFL game since 1950. Can you name the other?

(Answer at the bottom of today’s edition) 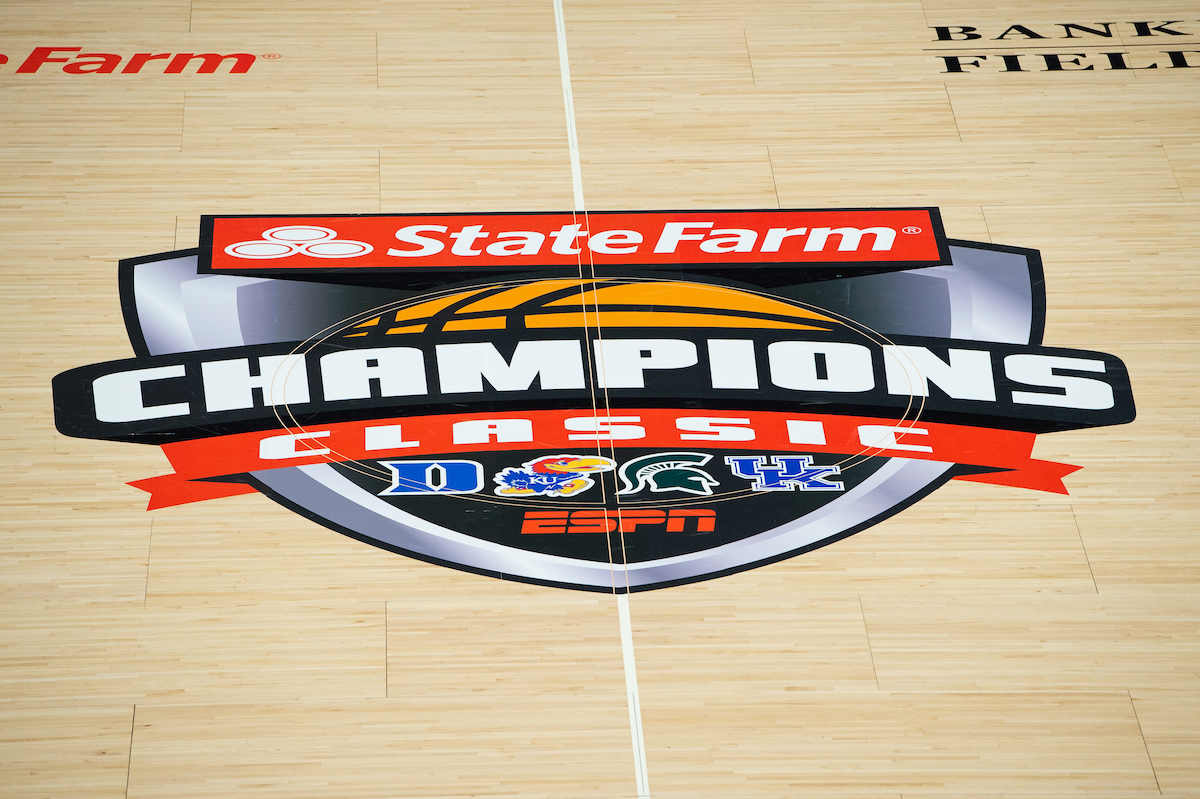 The Champions Classic is always one of the biggest events at the start of the college basketball calendar, showcasing four of the sport’s most historic programs. This year was no different, although the early-season rust was on full display.

#8 Michigan State def. #6 Duke (75-69)
To start the night, #6 Duke hosted #8 Michigan State, and while the visiting Spartans began the game sloppy, they quickly righted the ship, turning an early 10-point deficit into a four-point halftime lead. Tom Izzo’s team never looked back, growing their advantage as big as 16 before eventually winning 75-69 for the first victory at Cameron Indoor in program history. Rocket Watts led the way with 20 points, while four other Spartans scored in double figures. The Blue Devils had their worst field goal percentage at home since 2014.

#7 Kansas def. #20 Kentucky (65-62)
In Game 2, #7 Kansas and #20 Kentucky took the court in Indianapolis. Kentucky’s Isaiah Jackson blocked eight shots and the Jayhawks struggled mightily on offense, shooting just 30% from the field, but Kentucky didn’t fare much better. Jalen Wilson scored 21 of his 23 points in the second half for the Jayhawks as Kansas eked out a 65-62 victory and handed Kentucky their second defeat in a row.

Looking Ahead
Don’t miss the Jimmy V Classic tonight for another doubleheader of heavyweight college hoops action. First, #1 Gonzaga takes on #11 West Virginia. Then, #2 Baylor duels #5 Illinois in the first AP top-5 matchup of the season. It all starts on at 7pm ET on ESPN.

Could the Buckeyes Get Bumped? 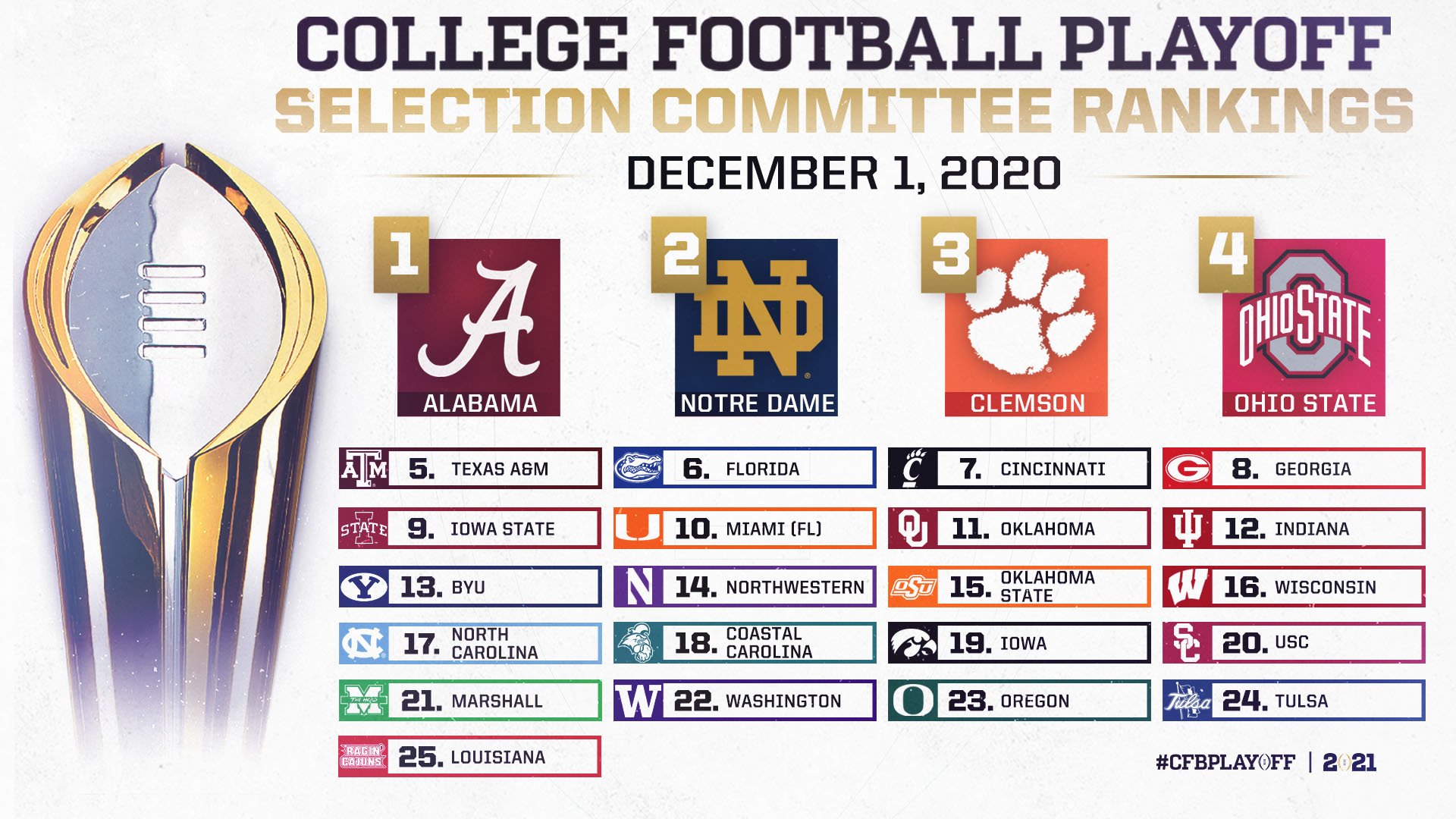 It seems silly to argue that Ohio State isn’t deserving of a Top-4 ranking and a spot in the college football playoff, but the Buckeyes could be the biggest victims of the virus (on the field) in the 2020 season. OSU has seen two games canceled or postponed, and they’ll need to play at least six to be eligible for the Big Ten Championship Game on Dec. 19. If either game against Michigan State (this week) or Michigan (next week) is delayed, Ohio State will be at the center of a CFB Playoff controversy unlike any we’ve seen before.

For now, the second edition of CFB Playoff rankings have been revealed. There’s no changes among the Top-7 teams, but one glance at the record column illustrates how the Buckeyes might be on thin ice.

Scenarios: If Ohio State gets bumped from the CFB Playoff picture, It would appear that the SEC and ACC would steal the show. Either Texas A&M or Florida would be first in line for the fourth spot. However, Both Notre Dame and Clemson are likely to meet again in the ACC title game, and Florida would have to shock Alabama in the SEC finale. If Clemson loses to ND a second time, Ohio State gets excluded and Alabama beats Florida, Texas A&M and Cincinnati could both find themselves in the playoff. 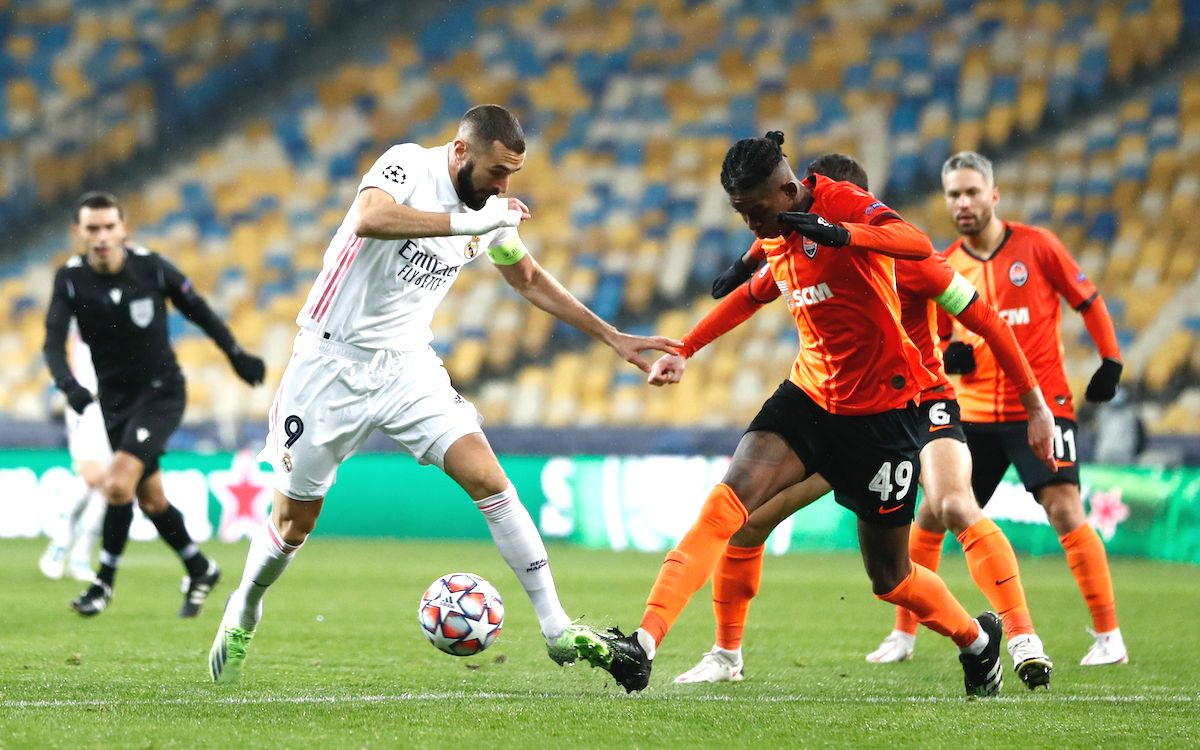 3 Draws on Matchday 5, But Real Madrid Are in Real Trouble

Matchday 5 in the Champions League arrived Tuesday afternoon with a trio of draws among group stage leaders, but that wasn’t the case for one club who’s fading fast. Real Madrid were winners of 4 of the last 7 Champions League crowns dating back to 2013, but this year’s club is flirting with failure to get out of the group stage. The Ukrainian club Shaktar Donetsk stunned Los Blancos with two second-half goals and a shutout yesterday (2-0). It’s the second win of the tournament for Shakthar, and both have come against Real Madrid. Group B is now up for grabs.

Additional Storylines
SI: Real Madrid Falls to Brink of Champions League Elimination
BBC: Liverpool Advance to Round of 16 With 1-0 Win Over Ajax

In the Shadows of TitansGreat teams and players whose stories were forgotten because they happened to run into someone just a little bit better.

A 3-Day Series By Connor Groel

Life is usually tough for NFL expansion teams. However, that wasn’t the case for the Jacksonville Jaguars, the only team to join the league post-merger and have a winning record through four seasons. After going just 4-12 in their inaugural 1995 campaign, the team won nine games the following year, earning a wild card berth and making a run all the way to the AFC Championship Game.

After coming up just shy of the Super Bowl, the Jaguars kept their momentum going with consecutive 11-5 seasons, making the playoffs two more times and winning their first division title in 1998.

Led by head coach Tom Coughlin, the young franchise had established itself as a legitimate contender to win the AFC, particularly since John Elway had recently retired following the Broncos’ win in Super Bowl XXXIII.

With two-time Pro Bowler Mark Brunell at quarterback, running back Fred Taylor  and wide receiver Jimmy Smith, the Jags had what ESPN’s Mike Golic called “one of the most potent attacks in the league.” But there remained questions on the other side of the ball.

Writing for Sports Illustrated, David Fleming said that “if Jacksonville expects to make its first Super Bowl appearance, the defense – and in particular the team’s pass rush unit – must raise its level of play.” In 1998, the Jaguars ranked just 25th out of 30 in total defense and tied for 27th in total sacks. Newly hired defensive coordinator Dom Capers would seek to change that with his aggressive blitzing style.

Aiding the Jaguars in their title hopes was what looked to be a weak division in the AFC South. Of the other five teams, the only real competition looked to be the Tennessee Titans, who had just been renamed from the Oilers. With Steve McNair, Eddie George, and future Hall of Fame offensive lineman Bruce Matthews, the Titans looked able to challenge the Jaguars and perhaps make the playoffs as a wild card. They would do that and then some.

Read Part II of Connor Groel’s “In the Shadows of Titans” in Tomorrow’s Edition.

🏀 DiDi Richards’ Miraculous Return
Baylor senior DiDi Richards suffered a spinal chord injury just over a month ago where she lost feeling and movement in her legs. For multiple hours, Richards feared she was paralyzed. She returned to the court on Tuesday for Baylor’s 67-62 win over South Florida.

🏈 Youngsters Shedding the “Bust” Label
For some, the weight of expectations that comes with a major NFL draft slot is just too heavy. After multiple failed years early in their careers, a few players have (finally) successfully quieted the whispers. (Bleacher Report)

🏈 Week 13: Head Coach Hot Seat Rankings
The 2020 NFL regular season is approaching its conclusion and to say it’s been a rollercoaster is a major understatement. Not every coach can use the pandemic to excuse away poor play… Time is running out on these coaches to avoid getting axed. (CBS Sports)

🏈 Power Rankings & Important Games
The NFL Power Rankings enter December trying to figure out which games are truly the most important. Yes, every NFL game counts, but we admit that some just count a little bit more. ESPN’s NFL Nation writers find the most meaningful games down the stretch. (ESPN)

Answer: The only previous Wednesday game in NFL history occurred in 2012 when the Giants-Cowboys season-opener was moved up one day to avoid conflicting with President Obama’s speech at the Democratic National Convention.